Photo: Roberto Firmino chills with his girlfriend ahead of Augsburg v Liverpool 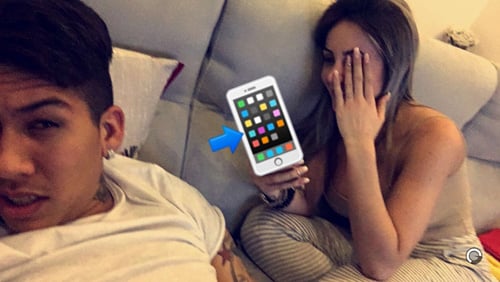 Roberto Firmino was in good form on Snapchat as the Liverpool star relaxed with his girlfriend ahead of Thursday’s trip to Augsburg.

The Brazilian playmaker has been in impressive form in recent weeks after he made his sixth assist of the season in the Reds’s stunning 6-0 victory over Aston Villa on Sunday.

Firmino has scored a credible five goals in 2016 so far after netting against Arsenal, Norwich City and Sunderland in the Premier League.

The South American is set to return to Germany on Thursday night for the first time since he moved to Liverpool from Hoffenheim in a £29m deal last summer.

But Firmino was more concerned with winding up his girlfriend Larissa last night ahead of the first leg Liverpool’s Europa League last-32 tie at Augsburg.

The 24-year-old playmaker has scored six goals and has made six assists in 23 Premier League games in his first campaign in the English top flight.

Firmino has also made one assist in three Europa League outings.