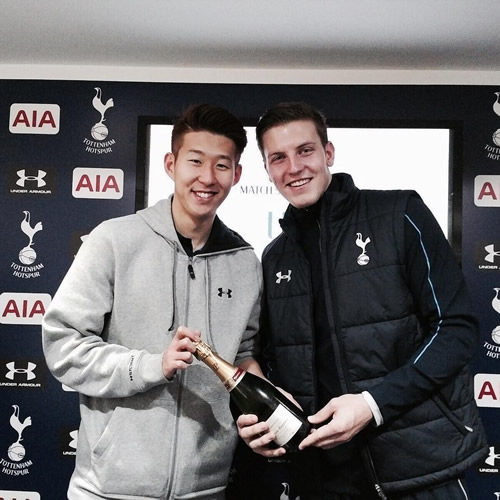 Son Heung-min looked to be in good spirits as he posed for a picture with Kevin Wimmer after Tottenham’s 2-1 win over Swansea City at White Hart Lane on Sunday.

Alberto Paloschi put Swansea in front at White Hart Lane after Angel Rangel’s effort fell to him in the 19th minute.

However, the Lilywhites equalised when Nacer Chadli deflected in Kyle Walker’s shot with 20 minutes left to play.

And Danny Rose then drove in the winner after Swansea failed to clear a corner.

Son posted the picture above on his personal Instagram account after the game and wrote: “Important to win this game! Congrat! To my boy #COYS #HM7 #KW27”

Spurs, who finished fifth in the table under Mauricio Pochettino last season in the Premier League, will now begin their preparations for their trip to West Ham United on Wednesday night.