Photo: Lucas Leiva and Mamadou Sakho all smiles ahead of Liverpool v Augsburg 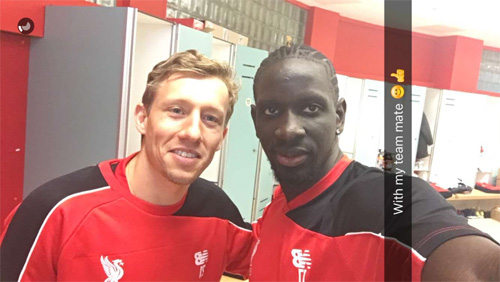 Lucas Leiva and Mamadou Sakho looked relaxed ahead of Liverpool’s clash against Augsburg in the Europa League on Thursday.

The Reds will host the Bundesliga outfit in the second leg of their last-32 tie after a goalless draw with Augsburg in Germany last week.

Liverpool enjoyed a rare weekend off following the opening game in the Europa League tie as Sakho enjoyed a trip to London and Paris.

However, Klopp’s squad are back in training ahead of the visit of Augsburg before Liverpool travel to Wembley for Sunday’s League Cup final date with Manchester City.

Lucas and Sakho certainly appeared in high spirits ahead of the Europa League tie as the French defender posted the above selfie on his Snapchat story.

Liverpool are unbeaten in five European home matches (W2 D3) since a 3-0 loss to Real Madrid in the 2014/15 Champions League group stage.

Augsburg have won their last two continental away fixtures.

Watch: Roberto Firmino shows off his skills ahead of Liverpool v Augsburg