For all his youthful on-court edginess, Borna Coric is nevertheless articulate and considered off court 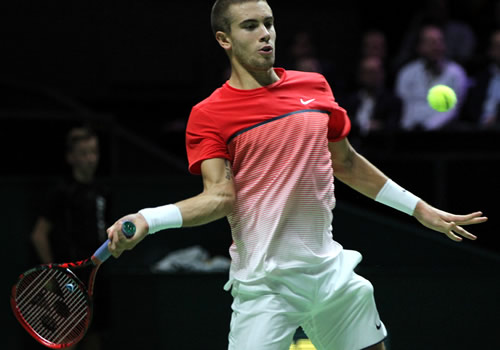 It has been a subject of considerable debate in recent years: For how long can the “Federer generation” maintain such a grip at the top of one of the most physically and mentally demanding sports in the world?

The Swiss 34-year-old world No3, and the man who tested super-Serb Novak Djokovic more than anyone else last year, was due to return to the ABN AMRO World Tennis Tournament more than a decade after he first won the title here. That was before the unthinkable: Federer injured his knee and headed to Switzerland for keyhole surgery—the first time in a title-packed 18 or so years that his evergreen body had needed such intervention.

Yet Federer is proving to be the standard-bearer for a phalanx of players who continue to ply their trade—and at the highest level—well into their 30s.

Half of the top 12 players are among their number, three of the top half dozen—and Rafael Nadal and Richard Gasquet will join their ranks before the start of Wimbledon this summer.

And already this year, three of the seven names to lift trophies are over 30—and Gasquet is a fourth. One of them, Victor Estrella Burgos, won his first ever title in Quito last year, aged 34, and has now defended it, too.

So while Federer may be missing from Rotterdam, this tournament is more than reinforcing the over-30s theme. In a draw of 32, 11 are on the ‘evergreen’ list, with a 12th, No8 seed Viktor Troicki, turning 30 on Wednesday.

As this maturing storyline has unfolded, there has been considerable agreement about the reason: The annual tennis cycle—along with its constituent matches—is longer than ever; racket technology has encouraged the baseline game to flourish; meanwhile, sport and physiological sciences have helped bodies to perform longer and harder—and recover better. It may take longer to develop the physique and resilience to reach the top, but unparalleled professionalism, on and off court, is helping to keep the best players at their peak.

David Ferrer commented during the World Tour Finals: “I think it is because now fitness is very important in tennis. And we don’t have a lot of injuries…. And maybe younger players are maturing later.”

Federer said: “Given time [the next generation] will mature, improve, and also ultimately win Slams.”

And this week, Marin Cilic elaborated: “If you look at the generation that is born 1980, 81, 82, it’s amazing how many of those are in the top 100. There are not that many [youngsters after 1988-90] who came through in the last three of four years compared to before: It’s tougher now to break through. The game is more physical and the top guys are more experienced, and able to keep their physical level up at 35 or 36, pushing the game forward.”

It so happens, however, that the very tournament that boasts such a plethora of over 30s also features three particularly young and particularly promising players who could carve a path to the top for the next generation.

The youngest, 18-year-old Alexander Zverev, arrives in Rotterdam at a new career-high No70 after reaching the semis in Montpellier at the weekend—as well as the final of the doubles with his brother. He happened to beat Cilic along the way, and has the kind of eye-catching game, personality and still-maturing 6ft 6in frame to stand out from the crowd.

In Rotterdam, the young German will take on the tall, elegant and powerful Vasek Pospisil, one of the bridging “90s” generation tipped for great things during the last couple of years. It could be a fascinating yard-stick for both.

The second teenager, 19-year-old Hyeon Chung, ended 2015 at No51 and with four Challenger titles, earning him the ATP’s Most Improved Player of the Year Award. The Korean’s first ever Rotterdam match really will be one for the generations, a first-time meeting with 32-year-old Guillermo Garcia-Lopez.

However, the highest ranked teenager in the top 100 happens to be Cilic’s compatriot. The 19-year-old Borna Coric is ranked 38, having reached his first tour final in Chennai last month. At the end of 2014, though, he reached his maiden semi-final at the prestigious Basel 500, beating Nadal into the bargain, and then a year ago, he also made the semis in Dubai after beating Andy Murray.

Cilic, not surprisingly, pulled out Coric as the rising player to watch.

“I think for his age he is extremely professional. He’s physically already ready to compete with the top guys and be very competitive. It’s only a matter of time until he gets better results. Huge, huge achievement, and I think with his attitude, I would say he is the most serious youngster there is at the moment.”

The young Croat making his first Rotterdam appearance took on home favourite Thiemo de Bakker, and was quick to show the Dutch crowd what he was made of. There are few players, young or old, who show such intensity over every won point. He clenches his fist, jumps in the air, and struts with purpose between every point: It looks mentally and physically exhausting.

He showed real resolve, too, in chasing to the net on serve—sometimes rashly, and sometimes unable to control things when he got there—and edged the tightest of first sets from the big-serving Dutchman in a tie-break, 7-6(9): Coric had won 51 points to de Bakker’s 52.

The second set was more ragged, with breaks on each side, but de Bakker took it, 6-4. But it was the third set that showcased the mental toughness—and fitness—of the teenager. He dropped just one point out of 17 first serves, offered up only one break point chance, and was rewarded with a break to lead 5-3. He served out the match with ease, 6-3, after a testing two and a half hours.

For all his youthful on-court edginess, Coric is nevertheless articulate and considered off court, the maturity noted by Cilic as well as Djokovic in Dubai last year.

He admitted, after winning his first Rotterdam match: “I was lucky in the first set, as Thiemo missed a lot of set points, but luck is also part of tennis.”

He may need another touch of luck to get past a formidable opponent in the next round, either No5 seed Gael Monfils or the charismatic Ernests Gulbis. But make no mistake: when the over-30s finally hang up their rackets, the teenage Croat may be one of the first to step up.

French qualifier 34-year-old Nicolas Mahut beat Russian Teymuraz Gabashvili 6-4, 7-6(4) after midnight, in an hour and 51 minutes. He has risen from No71 at the start of the year to a current 54, and begins his doubles campaign at the Ahoy arena with Pospisil this afternoon.