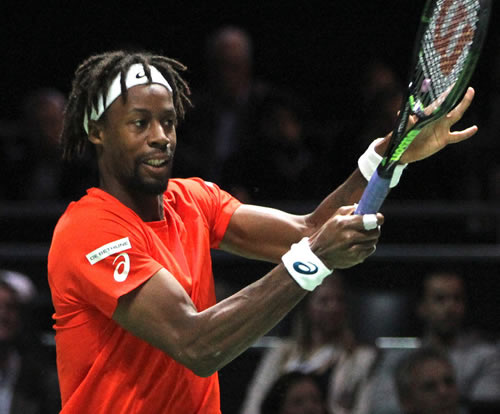 If their one and only previous match was anything to go by, the Round 1 encounter between two of the most charismatic players on the tour, No5 seed Gael Monfils and former world No10 Ernests Gulbis would be a thriller.

It was almost three years ago at the French Open, and home man Monfils came back from a set down to nab the win.

Since then, a lot of water had gone under both their bridges. For Monfils, one of the most athletic men on the tour, multiple injuries have interspersed five title wins from 23 finals through more than a decade on the tour, and that has been reflected in his rankings: He broke the top 10 in 2009, slipped to 20 the next year, returned to the top 10 in 2011—a career-high No7—but within a year was skidding from the top 50—and out of the top 100 by spring 2013. Since then, though, there has been a steady rise back to the top 20, where he now sits at No18 after a quarter-final run at the Australian Open.

Through it all, though, Monfils has been box office—a showman, a shot-maker, a danger to even the best. Ask Roger Federer, who the Frenchman dismissed in imperious form in the third round of the Monte Carlo Masters last year.

Though a few years back, you might have asked Federer the same question of Gulbis, when the Latvian’s precocious talent was taking the Swiss star the full distance in every match. In their second meeting, Gulbis came from a set down to beat Federer at the 2010 Rome Masters, and at Roland Garros in 2014, Gulbis won in five and went on to reach his first and only Grand Slam semi-final. That same year, he won his fifth and sixth tour titles and broke the top 20 for the first time.

But then his form dropped off, producing a 9-10 win-loss record after the French Open, and 2015 proved to be a disaster: 17 first-round losses and back outside the top 100.

His first match-win of 2016 came in Montpellier last week, and now he had come through qualifying in Rotterdam to set up this highly-anticipated match. But could the Latvian find some of his long-buried talent and motivation to push the rising Monfils?

Sadly, in day of dismal news for the tournament—first the withdrawal of top seed Richard Gasquet and then the narrow loss of No4 seed David Goffin—it would not be the hoped-for show-stopper.

Gulbis worked just one break point in the match, and it happened to be in the last game, but two deuces later, the match was done.

Monfils’ next match really does promise to be a lively one, played as it is against the impressive teenager Borna Coric, who is already up to 38 in the rankings. Monfils admitted that his first match against the Croat would be a challenge:

“Going to be a tough one. I think he’s a young player who comes in strong from the baseline, runs very good, it will be tough to make winners. Tomorrow I expect long rallies. Think I am going to try to dictate play with my forehand and serve big, move him around, and try to get the win.”

They play the last match of a packed schedule that will bring another teenage star, Alexander Zverev, to Centre Court against the big all-court game of Vasek Pospisil. No3 seed Gilles Simon follows, and No 6 seed Roberto Bautista Agut, fresh from winning the Sofia trophy two days ago, opens the line-up.