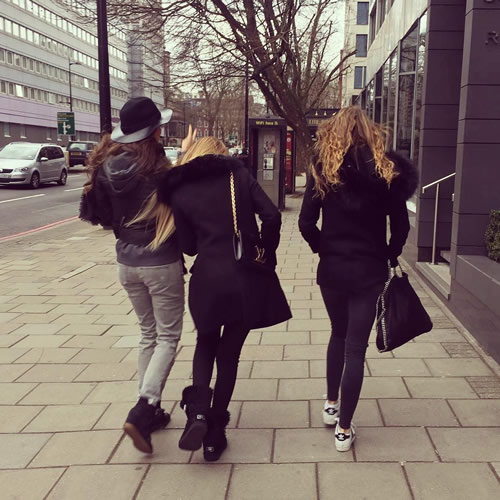 Samantha Martial headed down to London with some of her fellow Manchester United girlfriends as her husband gears up for Sunday’s crunch Premier League clash at Chelsea.

The Red Devils head into the game looking to build on their impressive 3-0 victory over Stoke City at Old Trafford in midweek.

Anthony Martial was on the scoresheet as he netted one and set up another in United’s win against the Potters in front of their home fans on Tuesday night.

And the French striker’s wife Samantha joined the girlfriends of Daley Blind, Matteo Darmian and Morgan Schneiderlin for a stroll on London’s Euston Road.

Samantha Martial posted the picture above of herself with Candy-Rae Fleur and Camille Sold on her personal Instagram account on Saturday afternoon and wrote: “London with my girls.”

Chelsea head into Sunday’s showdown with the Red Devils in 13th in the table and looking to return to winning ways after the disappointment of their goalless draw at Watford on Wednesday night.

Photos: Sanchez, Coquelin all smiles in Arsenal training ahead of Bournemouth trip