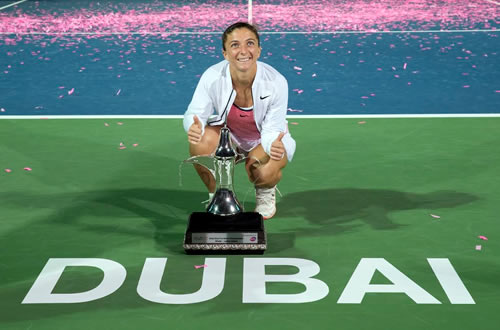 A week ago, the name of Sara Errani may not have been close to the top of the list of favourites for the prestigious Premier title at the Dubai Duty Free Tennis Championships.

Currently ranked just 22, the petite Italian was, after all, not even among the eight seeds who started the tournament.

With the likes of Serena Williams and Agnieszka Radwanska absent with injury, and then Simona Halep and Petra Kvitova losing before they had won a single match, it looked in the early stages as though former world No1 Ana Ivanovic or perhaps the young and improving Elena Svitolina had the chance to run to the title in the desert.

But Errani, who exchanged the clay of Rio this time last year for the hard courts of Dubai this season, has struck gold to win her first title since that Rio outing in 2015, beating a similarly unexpected finalist, Barbora Strycova, 6-0, 6-2.

The No47-ranked Czech, who like Errani has been a pro for more than a dozen years, had a losing record against the Italian, but their last meeting was a marathon affair. On the grass of Eastbourne, it took over three hours to determine the winner, which happened to be Errani, 6-2, 6-7 (1), 7-6 (7).

But the Czech, owner of just a single title back in 2011, looked nervous from the off, and Errani broke in the opening game. It went from bad to worse, a whitewash of an opening set, and Errani then broke in the first game of the second set.

The Italian served at a remarkable 90 percent on first serve, and offered up not a break point chance in the second set as she bustled around the court, making a total of just 11 unforced errors in the match, and dominating her opponent through just 66 minutes of tennis.

She was both joyful and gracious in victory: “I have no words. I’m sorry for Barbora—she’s an amazing player, but I’m really happy to win this tournament. It’s been a tough week for me, and I’m really happy for me, my team and my family and friends.

She then revealed that she had considered not playing the tournament at all: “It’s an unexpected title for me. We were thinking maybe not to come here, just stay home and recover and try to make it good… So to win here is amazing.”

Aside from a quarter-final run in Sydney, Errani—a former top-five player and French Open finalist—suffered a difficult opening to 2016, scoring just two match-wins from three tournaments plus a Fed Cup tie against France. Dubai marks not just her first—and biggest—title in a year but her first final since last summer.

She also boosts the profile of an outstanding Italian checklist of success this week. The 33-year-old Roberta Vinci, also winning her first Premier event last week in St Petersburg, broke into the top 10 for the first time in her long career, having last year reached her first Grand Slam final at the US Open against compatriot, Flavia Pennetta, who herself was claiming her first Major.

And while Errani was winning in Dubai, the 35-year-old Francesca Schiavone was reaching her first final in almost three years in Rio. She will take on either Sorana Cirstea or Shelby Roberts in an attempt to make it three Italian titles in the space of just over a week.