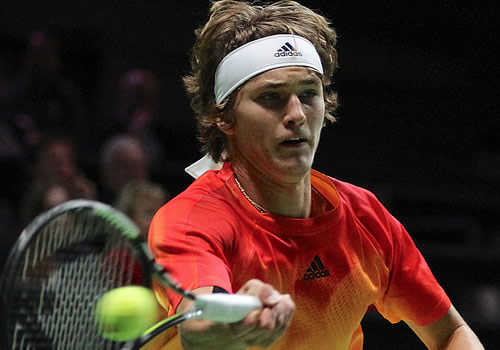 It had been something of a rocky start for the first ATP500 tournament of the year in Rotterdam.

As if losing its star draw Roger Federer to knee surgery before the event started was not enough, it quickly bid farewell to top seed Richard Gasquet, also injured, before he had played a match. Then two popular seeds, Frenchman Benoit Paire and Belgian David Goffin, lost earlier than expected to veterans Ivan Dodig and Marcos Baghdatis respectively.

But if there was a storyline at the ABN AMRO World Tennis Tournament to lift the mood, however, it was arrival in Rotterdam of three teenagers who many are tipping to spearhead the next generation of players.

Two of them had stepped up already. Korean 19-year-old Hyeon Chung, who ended 2015 at No51 and with four Challenger titles—along with the ATP’s Most Improved Player of the Year Award—battled back from a set down in his first ever Rotterdam match against Guillermo Garcia-Lopez.

Then 19-year-old Borna Coric, already ranked 38, with the scalps of Rafael Nadal and Andy Murray to his name, and here after reaching his first tour final in Chennai last month, also fought long and hard to beat home favourite Thiemo de Bakker in three sets.

Now it was the turn of the youngest of the trio, the youngest in the top 100, 18-year-old Alexander Zverev, to try his luck. He arrived at a new career-high No70 after reaching the semis in Montpellier at the weekend—where he made the finals in doubles with his brother too.

Zverev happened to beat Rotterdam’s No2 seed Marin Cilic along the way, as well, and owns the kind of eye-catching game, personality and 6ft 6in frame to stand out from the crowd.

The young German would play Canadian Vasek Pospisil, one of the “90s” generation tipped for great things a couple of years ago, in what promised to be a fascinating yard-stick for both.

For Pospisil, one of a group of players born in the 1990s—along with the likes of Milos Raonic, Dominic Thiem, Grigor Dimitrov and David Goffin—has long had the makings of a fine player: Tall and powerful, with all-court skills and a determined mind-set.

Slower to mature than some of his contemporaries, Pospisil broke into the top 50 in 2013 with three semi-finals, including the Montreal Masters and Basel. In 2014, which he started at a career-high 25, he reached his first singles final in Washington and won the Wimbledon doubles title with Jack Sock. Last year he made the singles quarter-finals at the All England Club, too.

Yet Pospisil had not made the inroads into the top 20 that, for example, his compatriot Raonic had. And he had not started 2016 as well as the young Zverev: just one match-win from four played. Could Rotterdam be a launch-pad or would new-generation Zverev join Chung and Coric?

Both began cautiously, trying to adjust to their first match on this court and to the noise of Kids Day. Conditions were not easy, but they settled down as they edged towards 5-5 with little between them. Pospisil, though, was finding the pace a challenge and breathing heavily: The result was a time violation warning, and two break points later, Zverev took advantage, broke and served out to love.

The long-limbed Russian—whose family is naturalised German—did not need any more encouragement. With Pospisil struggling to find his first serve, Zverev broke straight away with a delightful touch volley, proof if it were needed that the teenager has picked up some useful skills in doubles with his brother.

Pospisil survived three more break points in the fifth game but Zverev took control from the baseline with clean, angled hitting on both wings, and broke again in the seventh. Minutes later, he had served out the victory, 6-2, after just 81 minutes.

The German/Russian soon proved himself to be just as adept in English as in his two native languages, first by charming the Centre Court then in the most relaxed and proficient press conferences you could wish for from one of such tender years.

Few players take control of the media with such ease, and pull off that difficult balance of oozing confidence without any sign of arrogance.

“I’ve been playing well for the last two weeks. Even in Australia, I think I played well, just an unlucky draw to play Andy [Murray], who went on to the final again. I just feel like I’m in a good place to do well on the ATP tour.

“Last year I felt I really belonged for the first time. 2014, I had this one run in Hamburg to the semi-finals, but last year, I was winning matches on a weekly basis, so I feel like I really belong here now, and am thankful to get the chance to play in the main draw from Richard [Krajicek]. He believes in me, I hope.”

Zverev’s father is a former tennis player, his mother a coach, and the brother who is 10 years his senior is working his way back up the rankings from wrist injury. Could the young Zverev have turned to any other calling? It seems yes, for he is—or was—adept in three sports as well as three languages.

“I played three sports: soccer—goal keeper—and field hockey. The club where I come from in Hamburg, we have one of the best hockey teams in Europe… Actually, my team were German champions when I played.

“But when I was 12 years old, I had to make a decision—and there was not really a doubt that I would be a tennis player.”

Asked if Rotterdam could deliver this star of the future his first title, he grinned, hesitated, and concluded: “I won a match here, so that’s a good beginning!”

Zverev next plays either No3 seed Gilles Simon for the first time, or Robin Haase, who he beat two years ago for the loss of just two games. Should he advance, he could face Coric in the quarters, though the teenage Croat first has the unenviable task of taking on Gael Monfils.

There was more good news for the tournament from the remaining seeds, too. The in-form No6 seed Roberto Bautista Agut beat fiery Joao Sousa, 7-6(4), 1-6, 6-3, to extend his season to 13-2: He already has two titles this year from Auckland and Sofia. He next faces Jiri Vesely.

Alexander Zverev listens and learns – from his brother and Roger Federer