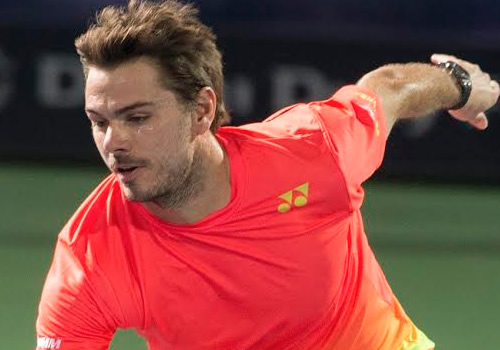 Less than 24 hours after Novak Djokovic was forced to withdraw half way through his quarter-final against Feliciano Lopez, Dubai had the misfortune to lose another of its star attractions through injury.

Nick Kyrgios has been setting the tennis stage alight almost from the first. Still only 20 years old, he has two Grand Slam quarter-finals under his belt and a catalogue of wins over big-name opponents: Rafael Nadal and Richard Gasquet at Wimbledon in 2014; Roger Federer in Madrid last year; and then Marin Cilic, Gasquet and Tomas Berdych in Marseille last week to claim his first final.

His form continued this week in his debut Dubai appearance: first he beat Rotterdam champion Martin Klizan, and then scored another storming win over Berdych in the quarters.

The swagger, the unconventional look, and the blistering talent were certainly making an impression in the Emirates, and his semi against Stan Wawrinka, aside from placing two great shot-makers in opposition, had an extra touch of spice, for the last time they played was at the Montreal Masters. In that match, Wawrinka retired in the third with a back injury, but Kyrgios was afterwards reprimanded by the ATP for an offensive comment to Wawrinka during the match.

However, if Dubai expected fireworks, it was sorely disappointed. For Kyrgios’s body has an Achilles heel—well several ‘Achilles heels’—that have hamstrung his progress several times in his short career. There have been wrist and elbow problems, back trouble and this year alone, an ankle and an arm problem that forced him out of the Hopman Cup and Rotterdam.

And already in this tournament, he had to overcome more physical problems. Against Berdych, gastric illness and a painful back were eventually controlled, but just a few games into his semi-final there were signs that all was not well.

Kyrgios double faulted to set two break points in the first game, but produced, in dramatic style, three aces to hold. However history repeated in the third game and this time the aces did not come to his rescue.

In contrast, Wawrinka hit three aces to hold for 3-1—and though a fast player himself, managed to control the super-fast rhythm that Kyrgios usually sets.

Another double fault, a forehand error and a backhand error, and the despondent Australian was broken again. Wawrinka, though, had a lapse in concentration to play a dreadful game in the sixth—almost a mirror of Kyrgios, with a double fault and three wild forehands—and gave a break back.

With a hold of serve in the bag, the Australian then took a medical time out to manipulate his troubling back, and promptly broke Wawrinka again in an eight-minute tussle from, 4-4. Perhaps, this would be a replay of Kyrgios’s match against Berdych, when back treatment injected new life into the Australian.

Alas, it was not the case. Wawrinka broke again and served it out, 6-4, in little more than half an hour. Some may have expected, from the Kyrgios demeanour, that he would call it a day at that point, but he continued for three more games, during which he won two points, and he threw in the towel, 0-3.

That gave Wawrinka plenty of time to engage with the crowd: He handed towels to numerous fans, signed balls and brochures, scribbled on arms and shirts, and vanished off court for press and an early night—not a bad way to prepare for his first ATP500 final since winning both Rotterdam and Tokyo last year.

He admitted, though, that he needed to keep improving: “For sure if you look from the beginning of the week I was not playing great at all. But that’s when I can still improve and I’m happy I did this week—not playing some great tennis, frustrated during matches, but still fighting and trying to find solutions to win more matches during the week.”

Wawrinka has not played in Dubai since 2008, and until this year, had not won a set let alone a match in his two previous visits. And even this year, he faced two match points in his opener against fellow single-hander Sergiy Stakhovsky before taking his first win, 7-5 in the third.

The Swiss played another over-30 one-hander in the quarters, too: Philipp Kohlschreiber. And remarkably, he could play a third in the final if Feliciano Lopez beats Marcos Baghdatis: A final between two over-30 single-handers, one a leftie, one a righty, who have both found some of their best tennis in the later years of their careers.

Whoever wins the other semi-final, however, Wawrinka will go into the title match with a winning record. Roger Federer may have missed the tournament he has dominated for so many years—and he is seven-time and reigning champion at the event based just a mile or so from his second home—but do not be surprised to see the Swiss flag continuing to fly over the Dubai Duty Free Stadium come Saturday.