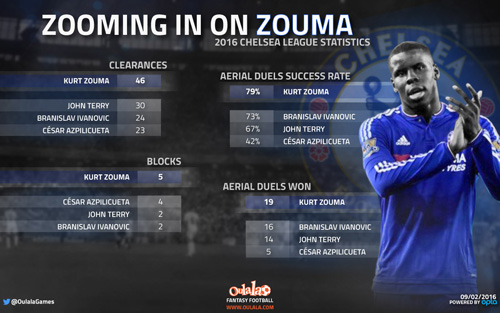 Kurt Zouma suffered a horrific injury in Chelsea’s 1-1 draw with Manchester United on Sunday when he damaged his anterior cruciate ligament after landing awkwardly on his right leg.

The France defender now faces a long six-month road to recovery which means Chelsea will have to make-do without him for the rest of the season and perhaps even a bit beyond. Can they cope?

Fantasy Football game www.oulala.com have taken a closer look at Zouma’s league stats in 2016 to see how much of an impact the 21-year old has had.

There is no doubt that Chelsea need to see off opponents and win more matches. However, after six games and three clean sheets, the Blues remain undefeated in 2016. Oulala’s stats show that Zouma has played a vital part in Chelsea’s recent run of good form and will be sorely missed.

With a total 19, Zouma has the highest number of aerial duels won in the whole Chelsea squad. He also has the highest success rate at 79 per cent of any outfield player.

Ironically, it was Zouma contesting for a high ball that led to his injury. Nevertheless his aerial presence and superiority will be sorely missed by the Blues.

In 2016, Zouma made a highly impressive 46 clearances – 16 more than second place John Terry on 30. Oulala’s stats show that Zouma also lays claim to the most clearances of any Chelsea player this season with a total of 130.

The Frenchman also leads the way in terms of blocks made with a total of five since the turn of the year.

It now looks as though Gary Cahill will have to fill the shoes left by Zouma.

It was originally Zouma that pushed Cahill down the defensive pecking order. Cahill has barely featured for Chelsea since Guus Hiddink’s appointment back in December.

The 30-year old Englishman has not played in a Premier League win since Chelsea saw off 10-man Arsenal 2-0 back in September.

Is Cahill a good enough replacement for the injured Zouma? Can Chelsea continue their unbeaten run which goes all the way back to mid-December without the solid Zouma at the back?

Photo: Mesut Ozil hangs out with DJ ahead of Arsenal v Leicester