Liverpool haven’t had too much to cheer about in recent weeks but Roberto Firmino’s impressive form is a big positive for the Reds.

The Brazil international initially made an underwhelming start to his Liverpool career following a £29m summer move from Bundesliga side Hoffenheim.

However, Firmino has found his feet in the Premier League over the past six weeks or so in the absence of compatriot Philippe Coutinho.

The South American scored his sixth Premier League goal of the season in Liverpool’s 2-2 draw with Sunderland at Anfield on Saturday afternoon.

These stats shown on BBC’s Match Of The Day highlight just how good Firmino has been for Liverpool manager Jurgen Klopp in 2016. 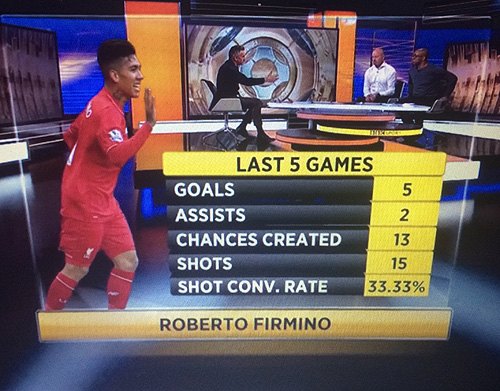 Roberto Firmino has impressed for Liverpool in recent weeks Photo: Match Of The Day/Screengrab

Firmino started his impressive run with a brace in a 3-3 draw with Arsenal at Anfield last month.

The Brazilian was on the score sheet twice and made a goal in Liverpool’s crazy 5-4 victory over Norwich.

Firmino’s goal and assist took his tallies to six and five respectively in his first Premier League campaign.

Photos: Erik Lamela and Hugo Lloris all smiles in training ahead of Man City v Tottenham

Martin Keown: Why Alex Oxlade-Chamberlain doesn’t do enough for Arsenal