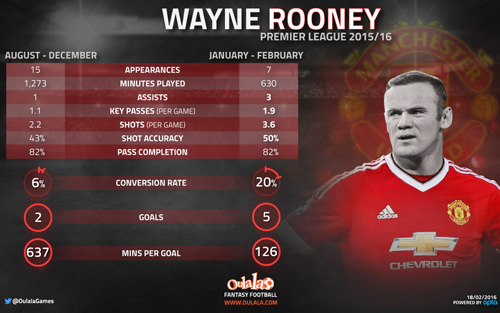 And he’s gone. It seems a cruel fate that after a recent turnaround in his performances, Wayne Rooney has suffered a knee injury which has ruled him out for at least six weeks.

Fantasy Football game www.oulala.com have compared Rooney’s Premier League stats from his first half of the season to his second to reveal just how much the United star had improved and how much he will be missed.

Rooney had a torrid first half of the season and scored just one goal in his opening five games. Worst was still to come as his next 10 games saw him find the back of net just once.

The United captain finished the first half of the season with a measly two goals in 15 league games.This gave him a minutes per goal ratio of 637. However, the cliched phrase ‘New year, new me’ could not be any more true with the United star.

In 2016, Rooney scored five goals in seven league matches before his injury, giving him a minute per goal ratio of 126.

The first half of the season saw Rooney average 2.2 shots per game, whilst 2016 saw him improve that figure to 3.6 shots per game.

Oulala’s stats show that Rooney’s conversion rate had also dramatically improved. From a lowly six per cent rate strike rate in the first half of the season all the way up to 20 per cent in 2016. As expected his shot accuracy is up by seven per cent from 43 to 50.

Another area where Rooney has contributed more to is in his chances created. Since the new year, the number 10 has gained a far better average of key passes per game (1.9 to 1.1). He also has more assists in seven games than he did in 15 (3 to 1).

His pass completion rate has remained at a solid 82 per cent.

Rooney’s injury will see him miss England’s upcoming friendlies against Germany and the Netherlands in March.

It will also seem him miss at least six matches for United, including two Europa League matches.

After one win in four Premier League matches, winning the Europa League is perhaps United’s best chance of securing a Champions League spot. As United’s top scorer, Rooney’s injury will be a real blow to those aspirations.