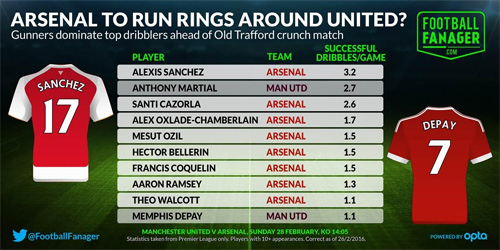 Arsenal will renew their fierce rivalry with Manchester United at Old Trafford in the Premier League on Sunday.

The above infographic by leading fantasy football site Football Fanager shows that the north Londoners can use their superior dribbling to propel past their opponents.

Eight of the top 10 dribblers play for Arsenal, with silky South American Alexis Sanchez topping the list with 3.2 successful runs with the ball per game.

Summer signings Anthony Martial and Memphis Depay are the only two from United in a category dominated by the Gunners.

Arsenal have beaten the Red Devils just twice in their last 11 Premier League attempts and haven’t won at Old Trafford in the league since 2006.

The FA Cup holders suffered a disappointing 2-0 loss to La Liga champions Barcelona in the first leg of their Champions League last-16 tie at the Emirates Stadium on Tuesday night.

Can Arsene Wenger’s men boost their title hopes this season with a win on Sunday afternoon?