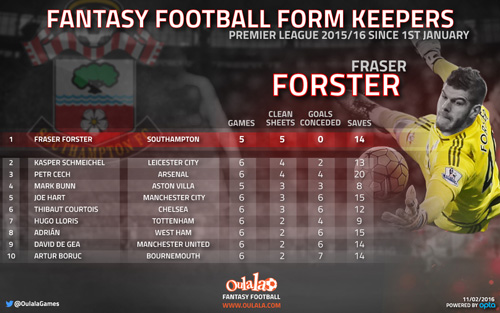 Fraser Forster has impressed upon his return from injury Photo: Oulala

Unhappy with the number of points that your current goalkeeper is providing your fantasy football side?

A Premier League shot stopper is unquestionably one of the most important players in fantasy football.

Regular clean sheets are crucial in collecting a consistent stream of points from your number one. When presented with the choice of which keeper to go for, the position offers up a chance of saving some cash with the array of low-priced options available every season.

Daily Fantasy Football game www.oulala.com boast an extensive database of statistics, which comprises 70 different criteria sourced straight from Opta, making it the perfect tool to identify which players you should be selecting in your fantasy football side each week.

The guys over at Oulala have taken a look at the stats of every Premier League keeper since the turn of the year and have revealed the top 10 shot-stoppers based on current form.

Southampton’s Fraser Forster has been the Premier League’s standout goalkeeper in 2016. The 27-year-old returned to the starting lineup having missed 10 months after suffering a career-threatening knee injury.

Appearing in the Saints last five league games, Forster has collected five consecutive clean sheets. The 14 saves that he has recorded has helped his side to four wins and a draw. Southampton go to Swansea City on Saturday, a side that have scored just 13 goals at the Liberty Stadium. Only Aston Villa have netted fewer goals at home this season. 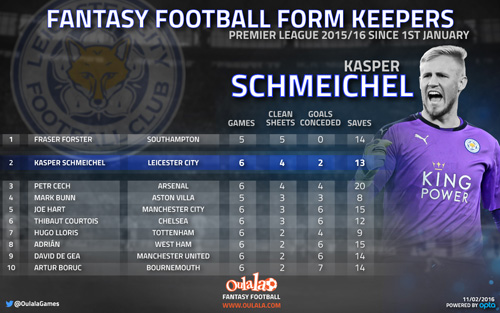 Leicester may be top but Kasper Schmeichel is no2 in 2016 Photo: Oulala

The Leicester City number one has collected four of his eight clean sheets in his last six games, highlighting the exceptional form he is currently experiencing. The 29-year-old has conceded just two goals since the turn of the year thanks to the 13 saves he has made.

Leicester have recently gone five points clear at the top of the table with just 13 games to go, much owed to the in-form Dane. The Foxes go to the Emirates on Sunday, a side that have scored seven fewer goals at home than they have away (16 to 23). 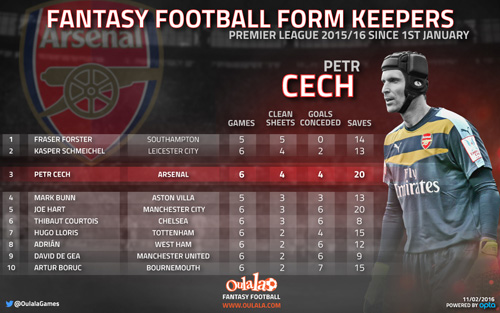 Petr Cech is the third best goalkeeper in 2016 Photo: Oulala

The 33-year-old is currently leading the race for the Golden Glove this season having racked up a total of 12 clean sheets from 25 appearances. The Czech international has undoubtedly been the most consistent shot-stopper this term, as highlighted by his recent form.

Cech has collected four clean sheets in his last six games, conceding just four goals. What’s more impressive is Cech’s involvement in recent games. Having registered 20 saves since the turn of the year, the Arsenal man has been the most active keeper in 2016. His side welcome the free-scoring Leicester City to the Emirates on Sunday, a side that has scored the most away goals this season (26).

With just one spot up for grabs, our analysis should make your decision an easier one as to which keeper will make it into your Fantasy Football side this weekend.

Alan Shearer: This is key factor behind Tottenham success