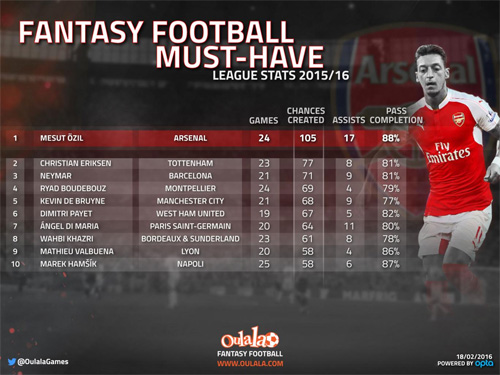 Mesut Ozil is the king of Europe Photo: Oulala

Mesut Ozil has enjoyed a season to remember so far, but the Arsenal midfielder will face his biggest test against Barcelona on Tuesday night.

Arsene Wenger’s side will host the La Liga champions in the first leg of their Champions League last-16 tie at the Emirates Stadium.

Ozil has been instrumental in Arsenal’s title charge this term, and the Germany international has scored four goals and has made 17 assists in 24 Premier League games.

While the World Cup winner is head and shoulders above his Premier League rivals, Ozil is also outperforming his European rivals in his playmaker role.

Tottenham midfielder Christian Eriksen is second in the list of playmakers but the Danish star has created 28 chances less than Ozil, providing just eight assists, with a pass completion of 81 per cent.

Neymar, who will be one of Barcelona’s biggest threats on Tuesday night, is third in the list ahead of Dimitri Payet and Angel di Maria.

But who will come out on top when Ozil and Neymar face off in the Champions League on Tuesday night?