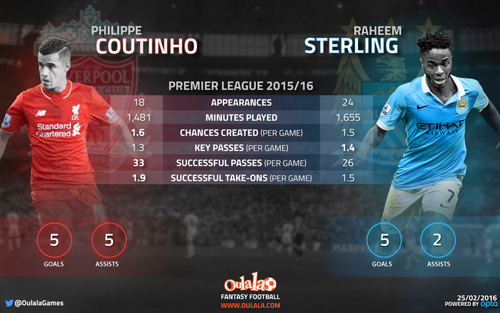 Raheem Sterling will face Liverpool for just the second time since his move to Manchester City in Sunday’s League Cup final.

The England international completed a £49m switch to the Etihad Stadium from Anfield after expressing his desire to play regularly in the Champions League.

Sterling, however, was unable to inspire the Citizens to victory in their only meeting with Liverpool in the 2015/16 season so far as Jurgen Klopp’s side were 4-1 winners at The Etihad.

The above Oulala stats highlight that Coutinho has been outperforming his former team-mate in the Premier League this season despite his injury problems.

Unsurprisingly, Sterling has played 174 more minutes than Coutinho, making 24 top-flight appearances, while the Brazilian has only featured in 18 Premier League games.

While Sterling has made more key passes per game than Coutinho, Liverpool’s pint-sized midfielder dominates the City winger in every other category.

Coutinho has created an average of 1.6 chances per game, has made 33 successful passes per game and has completed more successful take-ons than the England international.

Furthermore, the 24-year-old has scored five goals and has made five assists, while Sterling has netted five times but only created three goals for team-mates.

Whoever can come out on top in Sunday’s League Cup final could determine the outcome of the Wembley showpiece.