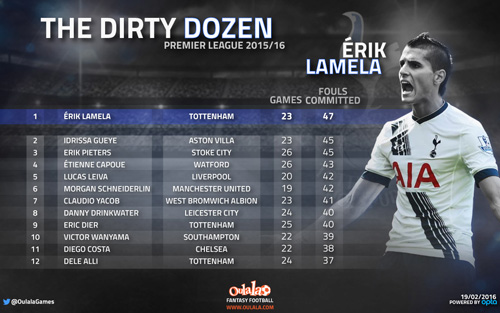 Fantasy Football game www.oulala.com have revealed the Premier League’s 12 dirtiest players this season – and the man that tops the list may come as a shock.

As expected, defenders and defensive midfielders make up the majority of the players to have committed the most fouls, however it’s Spurs forward Erik Lamela who surprisingly takes the number one spot.

The 23-year-old has committed a total of 47 fouls in just 23 Premier League appearances, an average of a little more than two per game. Two of Lamela’s Tottenham team-mates join the Argentine on the list. Eric Dier has made 40 fouls, while Dele Alli has committed 37.

It is therefore no surprise to see Spurs leading one particular table this season, the team to have made the most fouls (328). Manchester United have committed 325 and sit second, while Crystal Palace have made 323, enough for third spot.

Looking through Europe, Palermo midfielder Franco Vázquez has committed a shocking 75 fouls in 24 Serie A games. As the Premier League’s dirtiest player, Lamela is in-fact ranked as low as 18th across European football’s top leagues.

Is this a sign that English referees are more lenient than their European counterparts?

Or has the English game sharpened up, finally shedding the physical side it was once widely famed for and is now becoming more technical with the influx of foreign mangers and players?