Which strikers should your readers be looking to pick in their Fantasy Football sides this weekend? 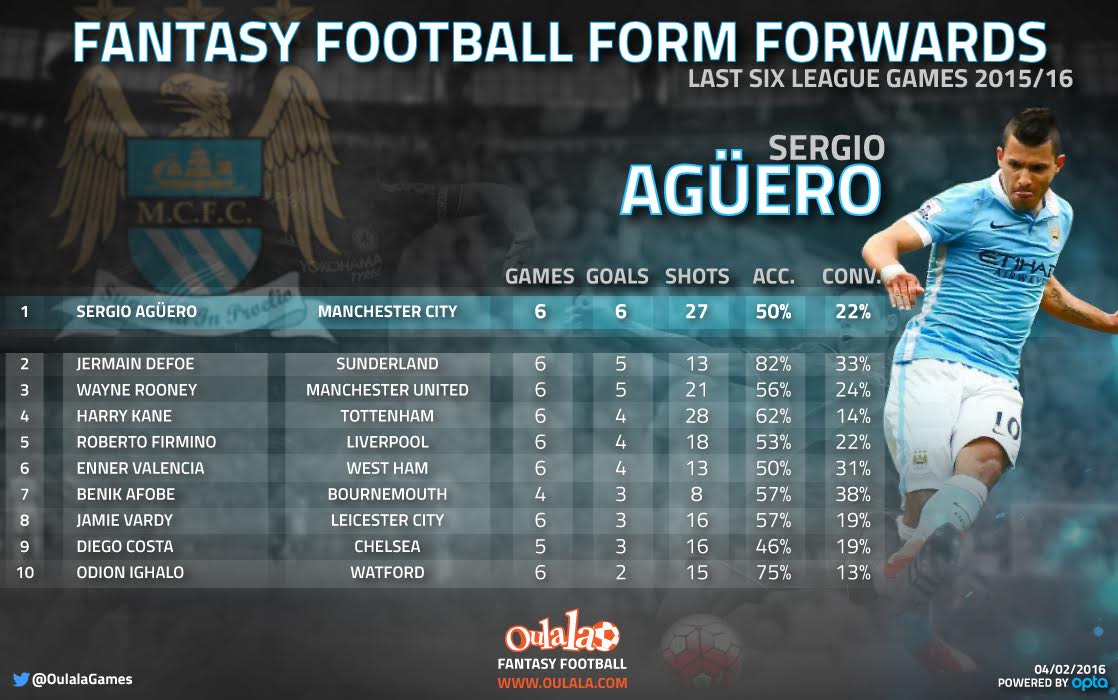 Wondering which Premier League forwards you should be looking to draft into your fantasy football team this weekend? Six strikers have already reached double figures for goals, making the decision of which two or three to select in your side a difficult one.

Daily fantasy football game www.oulala.com boast an extensive database of statistics, which comprises 70 different criteria sourced straight from Opta. Making it the perfect tool to identify which players you should be selecting in your fantasy football side every single week.

A key element in picking the right players at the right time is form. Many players will experience a purple patch during the season, and even the best players suffer a dip at times. The trick in fantasy football is to anticipate these transitions and act accordingly.

The guys over at Oulala have analysed the form of every striker in English football’s top flight to reveal the top 10 forwards based on current form. The all important numbers behind ten players you must be looking to consider including in your fantasy football side this weekend.

The stats reveal that over the last six Premier League matches, Sergio Aguero is currently the hottest striker in fantasy football at the moment, making him a must-have based on current form. The Manchester City forward has netted six goals in his last six games, averaging a goal every 84 minutes. The 27-year-old has registered 27 shots during this spell, giving the Argentine a conversion rate of 22 per cent. He has also enjoyed a shot accuracy of 50 per cent in recent weeks. Aguero faces table-toppers Leicester City at the Etihad on Saturday, a side that has conceded just one goal in their last six games. However, with nine of the Argentine’s 13 league goals coming at home, the Leicester centre-back pairing of Wes Morgan and Robert Huth will face their toughest test this season as they attempt to keep the Premier League’s most in-form striker quiet.

Sunderland’s Jermain Defoe takes second spot in the Premier League’s top 10 most in-form forwards table based on current form. The 33-year-old has scored five goals in his last six games for the Black Cats. Defoe’s five strikes have come from just 13 shots giving him an excellent conversion rate of 38 per cent. Defoe’s shot accuracy of 82 per cent is just as impressive. Sunderland go to Liverpool on Saturday, a side that has not been in the best form defensively, having shipped 12 goals in their last six matches.

Wayne Rooney is currently rated the third most in-form Premier League forward based on current form. The 30-year-old has racked up five goals from 21 shots in his last six league games, providing Rooney with a healthy conversion rate of 24 per cent. His shot accuracy currently stands at 56 per cent.

Manchester United travel to Chelsea on Sunday, a club still unbeaten under Guus Hiddink since the Dutchman took up the reigns at Stamford Bridge in December for a second time. The Blues are in reasonable form defensively having collected four clean sheets in their last six games.

Jamie Vardy may be the Premier League’s top scorer with 18 goals in 24 games after netting a brace at home to Liverpool on Tuesday night, but the 29-year-old’s recent form has the Leicester City forward ranked as only the eighth best striker in the Premier League over the last six games. Vardy has netted three goals from 16 shots in recent weeks to record a conversion rate of 19 per cent. His shot accuracy currently stands at 57 per cent.

A top of the table clash against Manchester City awaits Vardy on Saturday as his side travel to the Etihad. Manchester City have been in excellent form defensively. Despite missing captain Vincent Kompany. Manuel Pellegrini’s side have conceded just three goals in their last six games, recording four clean sheets in the process.

As many forwards enjoy a hot run of form in the Premier League, being constricted to just three strikers in your fantasy football side has its problems. However hopefully, our in-depth analysis should help give you a much clearer idea in what direction your team will take over the coming weeks, and in turn put it one step ahead of your rivals.