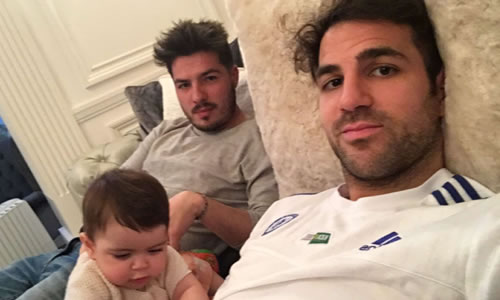 Cesc Fabregas put his feet up at home after his impressive performance helped Chelsea come from behind to earn a point in Saturday’s 2-2 draw with West Ham United at Stamford Bridge.

The Spanish playmaker was in good form for Chelsea as he scored both of the Blues’ goals during the Premier League clash in west London.

The 28-year-old netted a late penalty to earn a point for Guus Hiddink’s men after they trailed the Hammers 2-1 at Stamford Bridge.

And the World Cup winner looked relaxed as he chilled out at home on Saturday evening with his family.

Fabregas posted the picture above on his personal Snapchat account on Saturday after the Premier League draw.

Chelsea are now not back in Premier League action until their trip to Aston Villa after the international break on Saturday 2 April.

Saturday’s draw left the west London side in 10th place in the top flight table.

Paul Merson: This is the signing Arsenal should make this summer