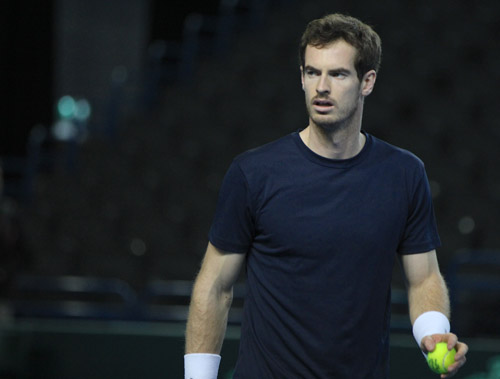 When it comes to Andy Murray and British tennis, the list of achievements grows longer by the week.

Many of those milestones, there is no denying, have been prefaced ‘first since…’, a reference to the fact that a good number of Murray’s landmarks were set by perhaps the best known British player in this sport, Fred Perry.

Then last year, Murray spearheaded Great Britain to its first Davis Cup since… yes, Perry in 1936, and though it was a team effort of several years’ duration, few would deny the singular effort and achievement of Murray. Through 2015, he became only the third player to achieve an 8-0 singles win-loss record and only the fourth to win 11 rubbers—singles and doubles—in a year since the creation of the World Group in 1981.

He ended 2015 at No2 for the first time, and with the BBC Sports Personality of the Year award in his pocket. Then a week or so after reaching the final of the Australian Open, he became a father for the first time.

[Success] is not easy. But the only way to do it is to keep working hard. You [have to] work hard and try to improve

You might think that, with the defence of Olympic gold looming over the horizon in August—and sandwiched as it is between two Grand Slams and two Masters tournaments—and growing accustomed to the changing rhythms of life with a baby, another Davis Cup campaign would be low on Murray’s list of priorities.

But judging from a comment made after the draw for Round 1 of this year’s tournament, his desire is dimmed not at all.

“I think one of the reasons I’m here this year is that I really want to win it again. After experiencing it last year, I thought, you know why not? I never thought we’d be able to do it, but then I thought, why can’t we do it again?”

There are, it’s true, a few new incentives, new milestones, to tickle the taste-buds: Winning this opening tie against Japan would seal tie-win No150 in a British Davis Cup timeline that has left not a year unplayed since its start in 1900.

He is on an 11-match winning streak in Davis Cup, and has an unblemished 11-match record on hard courts in the competition. But it is not the statistics that stimulate Murray.

“I thought the ties last year were unbelievable. Enjoyed every one of them, in terms of atmosphere. It was tough at times, mentally and physically, after the times of year the ties were coming. But I think everyone on the team enjoyed that experience of winning, and we would all love to try and do it again.”

For all his success and for all the popularity that has grown around his broad shoulders as a nation came to empathise with each victory and each loss, Murray revealed something of the struggles he has often overcome on his way to winning both big titles and big popularity.

“[Success] is not easy. But the only way to do it is to keep working hard. You [have to] work hard and try to improve, and if you really believe in yourself, you’re going to get there.

“You have to have the ability to do it as well, but it’s certainly not easy, mentally. It’s challenging. I found that hard myself. With the Davis Cup last year, that kind of crept up on us a little bit, whereas with the Slams, every year I was getting close and it felt like it was going on forever, that I wasn’t able to win one, and that was hard for me. Because people start questioning you every time—that question comes up all the time. You find yourself getting frustrated with that, you start doubting yourself, asking yourself the same questions.

“So it’s not easy. You need to be strong mentally and get the best help you can.”

And he is certainly not taking this tie for granted:

“We could lose this tie at the weekend. It’s a really tough match to win, they have a really good team. We need to concentrate on this one. I think with the help of the crowd—and everyone in this team has always performed well at Davis Cup—if everyone does that, we can get through this one, and who knows what will happen?”

What may happen is a face-off with another relatively new father, Novak Djokovic. If the draw plays out, and a Serbia headed by Djokovic beats Kazakhstan—as is expected—GB could meet Serbia as a single nation for the first time in the quarter-finals.

There is a footnote to that tie, however. The world Nos 1 and 2 did sit on opposite benches in Davis Cup once before, 10 years ago. Both were hugely promising teenagers, contemporaries and friends on the tour, and would win their first titles in 2006. Djokovic, playing for Serbia and Montenegro, and won both his singles rubbers, Murray played only doubles with Greg Rusedski, and lost.

Now look at them: fathers, Grand Slam champions, and Davis Cup victors both.

And whether Murray wins another Olympic gold, another Davis Cup, or another Wimbledon, perhaps he is already laying claim to another Perry achievement: as the best known Briton in tennis.