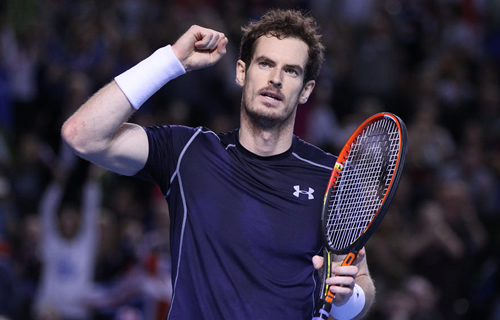 For a man who had not played a match since losing the Australian Open final at the end of January, who had become a father for the first time a week or so later, who was away from wife and daughter for the first time in a chilly Birmingham, and had the not inconsiderable role of leading the GB team into the defence of its historic 2015 Davis Cup victory, Andy Murray has looked in fine fettle.

A little rusty, perhaps, in the first rubber against Japan’s No2 player, the No87 ranked Taro Daniel, but even so, he conceded only five games in his hour and half, three-set trouncing of his young opponent.

Murray, though, is a man who likes plenty of court-time in his legs, and he was back practising with brother Jamie early Saturday. Sure enough, as he had done in the quarters, semis and final last year, Murray played the doubles rubber, too, and the British duo offered up not a break point chance, and dropped just 15 points on serve in the match.

So there was no question that Murray was fresh, nor that he was eager for victory. His body language said it all through the first two days, and his words ahead of the tie were just as eloquent: “I really want to win it again. After experiencing it last year, I thought, you know why not? I never thought we’d be able to do it, but why can’t we do it again?

“I thought the ties last year were unbelievable. Enjoyed every one of them. It was tough at times, mentally and physically… but I think everyone on the team enjoyed that experience of winning, and we would all love to try and do it again.”

With a 2-1 lead, a win by Murray against world No6 Kei Nishikori would take GB into the quarters, but this was no easy contest. As Murray pointed out, Nishikori was well warmed up for the tie, having won the Memphis title last month: “Kei has played Memphis and Acapulco, so he’s played a bunch the last few weeks whereas I haven’t. So [playing doubles] helps me to get my eye in a little bit on returns and get a bit more serving.”

Murray, though, had the 5-1 upper hand. His one loss came at the World Tour Finals in 2014, admittedly in their only indoor meeting. But it came after an exhausted Murray had battled to qualify from a low of No10 following back surgery a year before.

Aside from that, Murray had not lost a set against the Japanese, not even faced a tie-break—and won both matches last year.

That history, though, counted for nothing: This would turn into a gripping, see-sawing marathon that was separated by only six points from the 352 played.

From the first set, it was hard to separate the two men. Murray faced a break point in the first game, but got the first break in the fourth. Nishikori, though, broke back and they edged to 5-5, the Japanese man fighting off set point along the way. But with an hour on the clock, he wavered, served two double faults, and Murray broke for the set, 7-5. 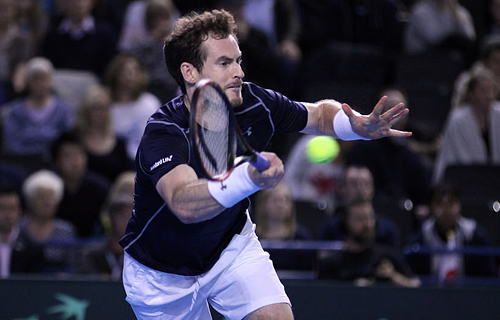 In the second, it was Nishikori who got the early lead with an early break, 2-0 and this time Murray returned the favour—and this time it would take a tie-break to separate them. Even there, Murray surged to 4-0, Nishikori levelled, and then had the first set point—saved by a Murray ace. The Briton defended for all he was worth and took the set, 7-6(6).

In the third, Murray began to look heavy-legged, indeed seemed to be cramping. He stayed on level terms until the seventh game, when Nishikori broke, and served it out 6-3.

Already this match was three hours old, and now it was Nishikori who looked the more tired as Murray seemed to get a second wind. The Briton it was who came close to breaking twice, but it would be the Japanese who took the lead with a break in the fifth, and another for 5-2. Murray rallied with a break back but could not save the set, 6-4.

The fifth set became a trial of physical and mental resolve as both men made growing numbers of errors, both notching up more mistakes than winners.

The first six games brought five breaks of serve, but Murray’s was the single hold. He had to dig deep to hold for 5-2, playing a wonderful baseline rally of painted lines, clipped nets and sliced brilliance. The arena rocked to the chant “one more game”, but Nishikori held for 5-3 before Murray, who looked on his last legs, managed to serve it out after close to five hours of exhausting tennis.

Not only did it seal an historic 150th winning tie for Great Britain but set another new record for Murray—one more that had been held by Fred Perry for eight decades. This was Murray’s 14th Davis Cup tie (singles and doubles) in a row, and as it happens, the joint-longest match of his career. The four hours 54 minutes matched the length of his first Grand Slam win at the US Open in 2012. 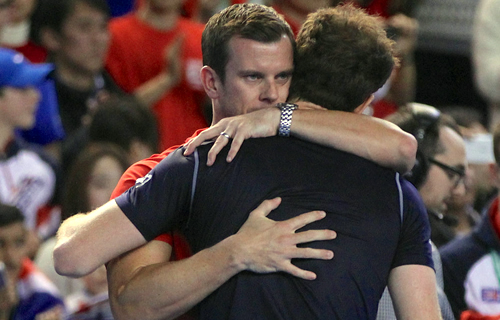 As it happens, that US Open title was won against Novak Djokovic, and while Murray was fighting through his marathon, Djokovic was doing the same in Belgrade against Mikhail Kukushkin of Kazakhstan. He went two sets to one down before fighting back to level the tie at 2-2 in five sets—in just three minutes short of five hours.

The significance of that was two-fold. The winner of that tie was lined up for Great Britain in the quarter-finals, and Viktor Troicki was rather faster in closing out the deciding rubber for Serbia, 6-2, 6-3, 6-4, over Aleksandr Nedovyesov. It will mean a trip to Serbia for the British team come July.

“[The Serbia tie will be a] tough match away from home,” said Murray. “It comes at a difficult time of year, no idea what surface they will choose, not easy going from Wimbledon.

“They all probably play their best tennis on hard courts and with Olympics just a few weeks away, I’d imagine Olympics would be quite high on Novak’s [Djokovic] priority list and it wouldn’t surprise me if they put it on a hard court.”

However for now, Murray took some extensive physical treatment after creating his latest piece of history. Then he hoped to be back in London in time to enjoy the rest of Mother’s Day with wife Kim and baby Sophia.

Suddenly all those tennis records take on a new perspective for the new family man.