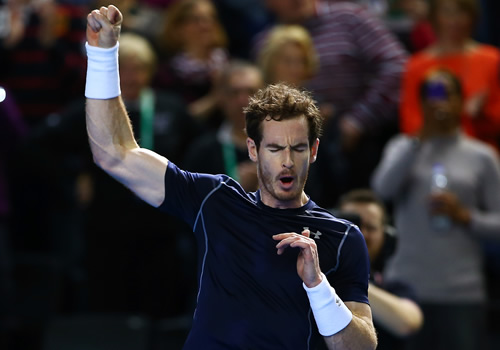 Little more than three months after world No2 Andy Murray led Great Britain to its first Davis Cup victory in 79 years, it was the same man who opened his nation’s defence in a cold, wet Birmingham.

The home team took on Japan for the first time since their only previous meeting in 1931, and should GB win the tie, it would mark a significant milestone in the nation’s history: its 150th tie-win since it played the inaugural Davis Cup tournament against the USA in 1900.

Murray took on an unknown quantity in the shape of the No87-ranked Taro Daniel, 23 years old, 6ft3in tall, and with an interesting American twang.

The young Japanese player had little more than 20 main-tour matches to his name, having plied most of his trade on the Challenger circuit, where last year he won three titles from four finals. Murray had never played him before, though team-mate Daniel Evans had beaten him a couple of times—and Murray watched one of those matches in preparation for this opening rubber.

There was also the small question of Murray’s absence since the Australian Open to take into consideration: Since losing the final in Melbourne, he had been on ‘paternity leave’ back home in support of wife Kim, and was back playing his first competitive match since becoming a father.

Would he be rusty, lacking match sharpness, slow off the mark?

Well he was certainly not the last of those three: He opened on serve with a winning ace, and scored the first 11 points of the match, helped to his break by two doubles faults from Daniel.

Then Murray wavered in the third game, slipping from 40-0 to deuce with first a forehand then a backhand long. A netted smash brought up break point, a netted volley took him to a third deuce, but he resisted, and raced onwards to a 6-1 set in under half an hour.

Both men started the second set serving well, with three love holds in the first four games, but Murray broke in the seventh and again in the ninth for the second set, 6-3. It had taken exactly an hour.

In the third, Murray, who had looked a little heavy-legged in the second set—whether through rust or tiredness—picked up his game and pace. He broke in the second game with a scorching backhand return-of-serve winner, and fired his fastest ace of the match, 135mph, to hold, 3-0.

The fifth game was one of the best of the match, with both playing some fine points. Murray defended three deuces and a break point, but he got the better of a drop-shot rally to hold, broke for good measure, and served out the match, 6-1, in an hour and 29 minutes.

Daniel afterwards admitted to nerves: “I went into the court really motivated and excited but then points started going, and a couple of double faults really hurt my motivation. And that made me really nervous. Obviously he’s the second best player in the world and if you don’t do your best it’s going to slip away really quickly.”

He also thought, though, that Murray have been a little nervous. How did the Briton view it?

“It was good. Obviously a quick start. Always helps in a situation like that where you haven’t played in a while. I thought I did a lot of things well: Maybe made a few bad decisions out there. Concentration could have been a little bit better at times, but for a first match in five weeks and against a player who makes a lot of balls, it was OK.”

He did, though, admit he may have to be a little sharper when it comes to world No6 Nishikori, a man he has beaten in five out of six matches.

“He’s obviously improved a lot in the last few years. I played some good matches against him last year in Canada and Madrid… Don’t know how much better I have to play.”

Judging from Nishikori’s performance in the second rubber against Evans, the Japanese man is in good form and fitness, having won the indoor Memphis title last month. The Briton, though, put up a sterling fight, and had chances in each set.

The two men exchanged breaks in the opener, before Nishikori broke again for the set, 6-3, after 38 minutes.

In the second, Evans went 40-0 on Nishikori’s serve in the seventh game, but could not convert. He fought off two break points at 5-6 but double faulted on a third to concede the set, 7-5.

The third set was the tightest of all: They exchanged breaks three times, Evans taking the lead only to have the Japanese hit straight back. At two hours, they were locked at 3-3, and Evans saved a break point to take it to a tie-break. But Nishikori was now lifting his game, and finished the rubber off with 40 winners, 7-6(3).

The captains were keeping mum about any changes to their doubles line-up, and could rejig things up to an hour before the start. With that proviso, the remaining schedule is: