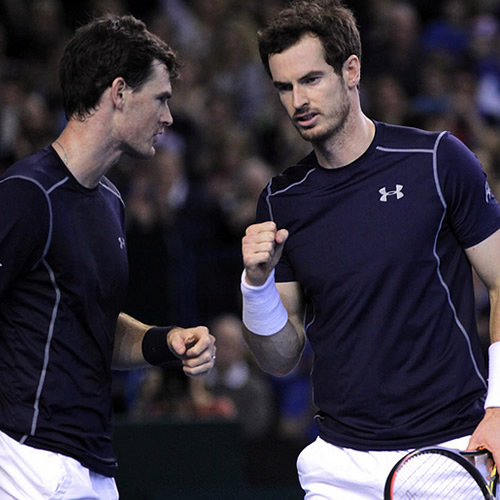 Andy and Jamie Murray in action together in Birmingham Photo: Marianne Bevis

Both teams were hedging their bets after Great Britain and Japan each won their opening singles rubber in the first round of the home nation’s Davis Cup title defence.

Would world No2 Andy Murray slot into the doubles rubber for GB? Leon Smith admitted: “Everyone knows when you’ve got someone like Andy who’s one of the best players on the planet and then Jamie whose sitting at No2 in doubles, you know where you’re at.”

Dom Inglot, a fine doubles player in his own right and named in the GB squad, did of course know all that, and when the two Murrays played side by side in Saturday morning practice, that as good as cleared any doubt. After all, the Murrays had joined up in the quarters, semis and final of last year’s championship run.

World No6 Kei Nishikori was also ready and willing: “If I have a chance I’m gonna play.” But his captain, via a translator, was noncommittal: They would discuss it Friday night.

Smith, probably with most of the British players and fans, thought Nishikori was a logical choice: “Yeah probably. He’s their best player. So I would have thought there’s a good chance of that.”

Nishikori was pressed hard by GB’s second singles man, Dan Evans, but had finished the business in three sets. However, in 21 ties played for Japan, he had played only two doubles rubbers. He had won on both occasions, but it was hardly a lot of experience.

Sure enough, Minoru Ueda stuck with his two young players, 20-year-old left-hander Yoshihito Nishioka and 23-year-old right-hander, Yasutaka Uchiyama—though he afterwards said that he had not decided until he saw how they performed in practice, so close to the time-limit one hour before the match.

They had played only one doubles rubber together before, and it soon became clear that they were going to struggle to make an impression against the Britons.

Andy Murray opened serve with two aces and a love hold. Jamie followed up by dropping just one point on serve, before younger brother Andy held to love again. A break in the eighth game, and Andy Murray served out the set in 34 minutes.

The Birmingham arena was stomping and singing with approval to a soundtrack of the now familiar of Loch Lomond and any number of Proclaimers songs.

The second set began even better, with an immediate break. In the eight games it took to complete the set, the Murrays dropped just three points on serve between them, and the sixth game in particular, boasting three aces from Andy Murray, was a cracker. He was left to serve out a two-set lead, 6-2. 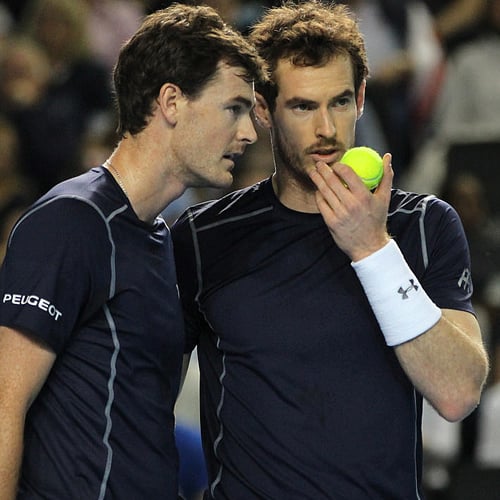 The match was an hour and seven minutes old, and the Japanese duo had yet to get a break point: Indeed they had earned only one deuce against the British serving.

The third set was closer—but then everything is relative. The Japanese held serve, did not face a break point and only one deuce to 4-4. Their problem was that the Murrays continued to serve clutch, dropping only six points on serve, and one of those was a double fault by Andy Murray.

At the first time of asking, come the ninth game, the younger Murray played a cracking down-the-line return of serve to draw an error on break point, and then confidently served out the rubber to love—with the duo’s 12th ace of the match.

It will, then, come down to final Sunday and the two reverse singles, and Andy Murray’s face-off with Nishikori was always destined to be the standout rubber between the two marquee names.

The good news is that Murray has the 5-1 upper hand. The one loss came at the World Tour Finals in 2014, admittedly in their only indoor meeting. But it came after an exhausted Murray had battled to qualify from a low of No10 following back surgery a year before.

Aside from that, Murray had not lost a set against the Japanese, not even faced a tie-break. Murray was quick to point out, too, that he had won both the matches last year comfortably: “He’s obviously improved a lot in the last few years, but I played some good matches against him last year in Canada and Madrid. It’s a tough match, different surface, haven’t played a lot of matches. I don’t know how I’ll feel on Sunday. When you’ve not played a while, consistency is the last thing that comes. I’ll need to come out and play very well,”

A reference, then, to his five weeks’ absence before this tie while he took paternity leave, but if there was any rust in his first singles rubber, it seemed to be gone by the time the doubles was done.

Should there be an upset, though, there is still every chance that Evans could get the better of Taro Daniel, a young player he has beaten on the Challenger circuit. Certainly captain Leon Smith was optimistic: “If you look at the match-ups it is on ranking. But even so yesterday, if Dan could have upped his return games a little bit more, he was really there, he was playing great tennis and actually could have been in a fourth or fifth set. The good thing is his game is in a good place, and it’s always good when you have two cracks at the next day. I think lots of people look at Andy against Kei but there is another match if required and that’s a good position to be in.”

Many had supposed GB, should they win, would play Serbia in the quarter-finals. But that team, even with world No1 Novak Djokovic playing singles and doubles, plus No23 Viktor Troicki as their second man, has not thus far stopped Kazakhstan taking a 2-1 lead in Belgrade. Kazakhstan’s top player is ranked just No79, but should Mikhail Kukushkin lead his country to victory, he could find himself in Great Britain come July.