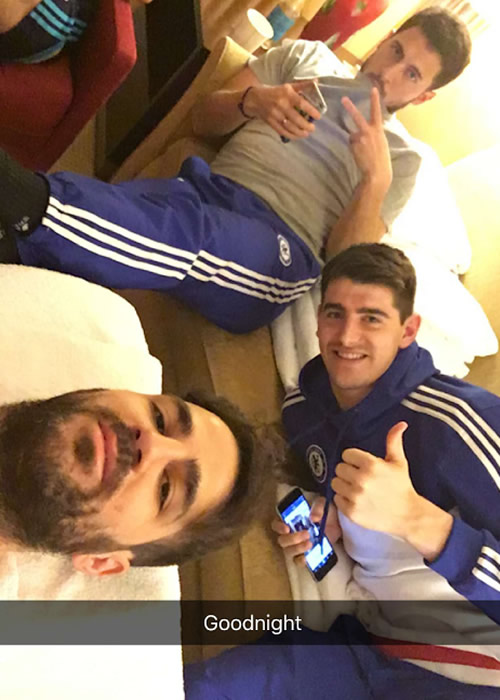 Eden Hazard and Cesc Fabregas both seemed to be in good spirits as they relaxed in the Chelsea team hotel ahead of Saturday’s Premier League clash with Stoke City at Stamford Bridge.

The west London side have been much improved since Guus Hiddink was appointed as interim boss until the end of the season back in December following Jose Mourinho’s sacking.

Chelsea have won five of their last 10 Premier League games, including their last three on the trot, to move up to the top half of the table for the first time since the opening week of the season.

Both Fabregas and Hazard will be expecting to feature when Chelsea host the Potters at Stamford Bridge on Saturday afternoon.

And the midfield pair were joined by goalkeeper Thibaut Courtois as they relaxed in the Chelsea hotel on Friday evening.

After Saturday’s game, Chelsea will turn their attentions towards their Champions League last-16 second-leg clash with Paris Saint-Germain at Stamford Bridge on Wednesday night.