Watch: Eden Hazard shows he’s still got it for Chelsea at Cobham

Eden Hazard has still got it

Eden Hazard has come in for plenty of criticism for his below-par displays for Chelsea so far this season.

However, there can be no doubting the Belgian playmaker’s ability, if this video is anything to go by.

The 25-year-old was filmed netting an outrageous curling effort from behind the goal after a training session at Chelsea’s Cobham base last week.

The former Lille star uses the outside of his right boot to curl the bouncing ball into the net in incredibly accurate fashion.

Hazard will be hoping to feature when Chelsea return to action for their Champions League last-16 second leg clash with Paris Saint-Germain at Stamford Bridge on Wednesday night.

The PFA player of the year has scored two goals in the FA Cup for the Blues so far this season but is yet to net in the Premier League. 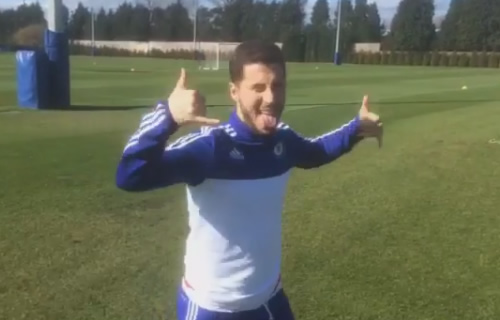 He has also notched up three assists for his team-mates in the Premier League this term.

Photo: Benteke, Origi all smiles for Liverpool selfie after 2-1 win at Palace