Indian Wells sees a clash of generations as highest ranked teenager in top 100, Borna Coric, is pitted against Thomaz Bellucci 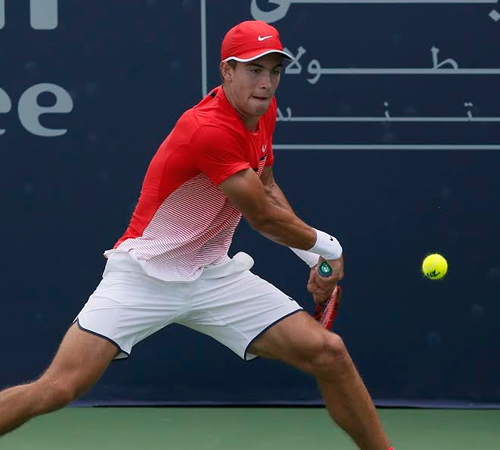 The timing, perhaps, could not have been better for the launch of a new ATP campaign that highlights a wealth of talent that is beginning to rise through the ranks of the main tour: ‘Next Generation’.

After all, two of tennis’s elder statesmen and biggest stars, No3 Roger Federer and No8 David Ferrer, are missing from the main draw this year—in Federer’s case for the first time since 2000.

Not that either man shows any sign of letting up, even though Federer turns 35 in August and Ferrer will be 34 next month: Both won multiple titles last year, six and five respectively, and Federer arguably posed the greatest challenge to world No1 Novak Djokovic during the Serb’s astonishing season.

Federer and Ferrer, though, are just two among 26 over-30s in the Indian Wells draw, nine of them seeded, and with Rafael Nadal set to join them in under three months’ time.

For a while now, ‘Generation 90’, the set of players born a decade later in the 1990s, was tipped to penetrate the upper rankings. One of the oldest of them, Milos Raonic, reached No5 last year, and after some injury problems, he scored a big win over Federer in Brisbane in January.

Also born in December 1990, David Goffin reached No15 last year, has won two titles from five finals, and already this year has beaten fellow ‘Generation 90’ star, 22-year-old Dominic Thiem, and a clutch of the #NextGen.

Thiem himself, up to a new career-high of 13 this week, leads the tour this season with 20 match wins, took the titles in Buenos Aires and Acapulco—with a semi run at Rio in between—beating the likes of Nadal and Ferrer along the way.

Bernard Tomic and Jack Sock, both 23, have worked their way to career-high rankings this year, 17 and 22 respectively, and both have reached finals and scored top-10 wins in the process.

And many expect the 24-year-old Grigor Dimitrov, who looked the brightest of the bunch during 2014 with three titles on three different surfaces and a high of No8, to regain his stature among the group through the season.

The Indian Wells draw has thrown up a couple of matches that may measure, to some degree, the current pecking order of this 90s group: Thiem and Sock are scheduled for only their second encounter in the third round, while Tomic and Raonic are set for a replay of their two-tie-break contest in Brisbane, after which the Canadian marched on to the title.

But all of them, as they look in their rear-view mirrors, will be only too aware that if they do not rise to the challenge of the over-30s, they could find the ‘Next Generation’ hot on their heels.

Yes, Indian Wells is a good time to remind them, and the tennis family at large, that a talent-packed set of players born in 1995 or later is already on the march.

Top of the pile, and seeded at 24, is 20-year-old Nick Kyrgios, who made a stunning opening to 2016. He did not lose serve in beating Richard Gasquet, Tomas Berdych and Marin Cilic en route to his first title at Marseille last month. And lest the swathe of young rivals in his quarter should forget, he reached the quarters of Wimbledon in 2014, beating then No1 Nadal.

The 19-year-old Hyeon Chung, who was scheduled for a second-round meeting with Kyrgios, lost his opener, but last year he surged up the rankings with four Challenger titles from six finals.

The highest ranked teenager in the top 100, at 47, is 19-year-old Borna Coric, who reached his first final in Chennai in January. But it was more than a year ago that he made headlines with victory over Nadal in Basel in 2014 and then over Andy Murray in Dubai 2015.

Coric beat 22-year-old Lucas Pouille yesterday, 6-2, 7-5, in 80 minutes. He next faces No29 seed Thomaz Bellucci, with the prospect of a big third match against either Berdych or the returning Juan Martin del Potro.

The American crowd was keen to see two great home hopes face-off on the main tour for the first time, 18-year-olds Taylor Fritz and Frances Tiafoe.

Fritz, ranked 80, is a US Open boys’ champion, and has surged from outside the top 1,000 since turning pro last year, when he became just the second 17-year-old to win consecutive Challenger titles. Then last month in Memphis, the 6ft 4in teenager became the youngest American to reach a tour final since Michael Chang in 1989.

However Tiafoe, the younger by three months and playing in his first Masters main draw, beat Fritz 6-3, 2-6, 6-3, in a big-hitting and fast-paced match. He next meets Goffin—a fascinating match-up of styles—but he cannot now play 21-year-old Kyle Edmund in the third round. The Briton served for the match in the third set against Guido Pella, but was broken back twice, 6-7(3), 6-4, 7-5.

Two more teenagers open their accounts as the top half of the draw gets under way, and while 19-year-old American wild card Jared Donaldson, ranked 157, will attract much interest with the home crowd when he takes on popular Canadian Vasek Pospisil in his opener, there is no doubt that 18-year-old Alexander Zverev, who precedes Donaldson on Stadium Court, will draw his own share of attention.

Zverev, a 6ft 6in multilingual German, has big tennis and an expressive personality, and seems already to be entirely at ease with his burgeoning stardom, and carried off the ATP’s Star of Tomorrow trophy last year.

He reached the semis in Montpellier and the quarters in Rotterdam with wins over Gilles Simon and Marin Cilic, and now takes on a man 13 years his senior in Ivan Dodig, who he beat in US Open qualifying last year.

Maria Sharapova’s costly mistake: the backers, the leavers, and the waiters

Harry Kane: Why my Arsenal goal isn’t my best for Tottenham