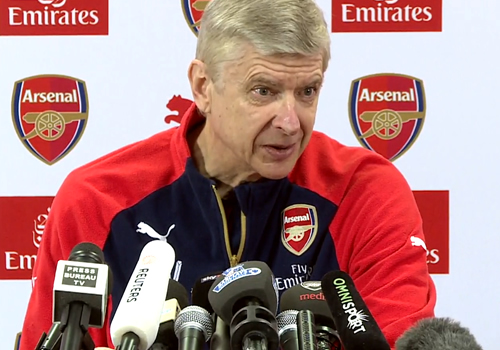 Arsene Wenger has revealed that Arsenal have no fresh injury concerns ahead of their Premier League clash with Swansea City at Emirates Stadium on Wednesday night.

The north London side head in to the game looking to bounce back from the disappointment of their 3-2 defeat at the hands of Manchester United at Old Trafford on Sunday afternoon.

Arsenal are currently third in the Premier League table and five points behind leaders Leicester City heading into the final 11 games of the season.

Speaking at a news conference at Arsenal’s London Colney training ground on Tuesday morning, Wenger said: “I will have to check today but I don’t think we have any problems from Sunday apart from one or two muscular tightness. But overall everybody should be available.”

“Six to eight weeks out,” said Wenger of Oxlade-Chamberlain. “No surgery. We feared surgery, but in the end we got positive news on that front. He should be alright for the Euros.”

The Gunners are three points behind north London rivals Tottenham, with Arsenal set to travel to White Hart Lane for Saturday’s derby.

Arsenal, who finished third last season, have not won the Premier League title since their famous unbeaten triumph back in the 2003-04 season.