Has Marcos Rojo been chatting to Gonzalo Higuain about a possible summer transfer to Manchester United? 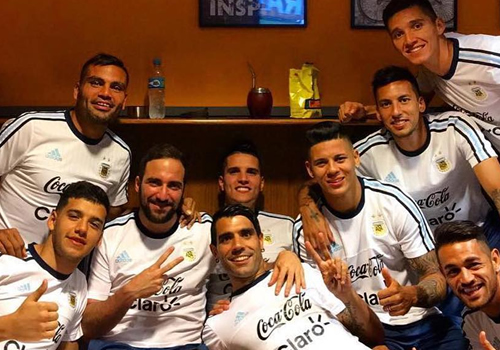 Marcos Rojo looked to be in good spirits as he posed for a picture with Gonzalo Higauin amid fresh speculation linking the Argentina striker with a big-money transfer to Manchester United.

The Red Devils have been heavily linked with moves for a number of key players in recent weeks, with United expected to be one of the busiest clubs in the summer transfer window following their disappointing campaign.

Napoli striker Higuain has long been linked with a transfer to the Premier League and has again been touted as a possible target for Manchester United this week.

Reports in the British media this week have suggested that the Red Devils are willing to meet the £74m release clause in his Napoli contract.

And Rojo could have been offering some advice to the striker as he ponders his future beyond the summer.

The duo are currently both on international duty with Argentina, and looked in good spirits as Rojo posted the picture above on Instagram on Friday night.