Photo: Philippe Coutinho all smiles with his wife and baby after Liverpool win

Philippe Coutinho had a special message for his wife 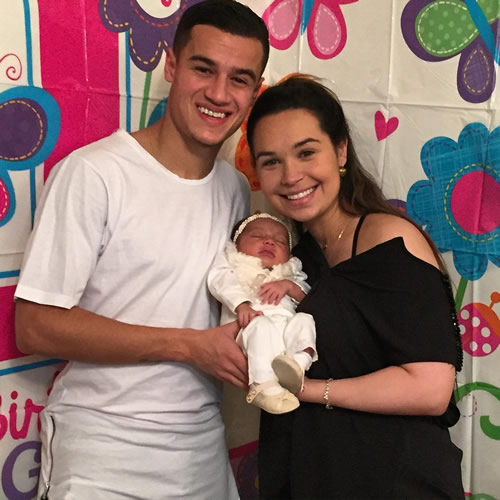 Philippe Coutinho looked to be in good spirits as he posed for a picture with his wife and newborn baby after Liverpool’s dramatic 2-1 win over Crystal Palace at Selhurst Park on Sunday afternoon.

Coutinho played 29 minutes at Selhurst Park as Jurgen Klopp’s men came from a goal down to earn the three points against the Eagles in London.

The result lifted the Reds up to seventh place in the Premier League table and left them six points adrift of the top four heading into the final nine games of the season.

And Brazilian playmaker Coutinho appeared to be in a good mood after the game, as he posed for a picture with his wife Aine and young baby to celebrate Mother’s Day in the UK.

Coutinho shared the picture above on his personal Instagram account and wrote: “Happy Mothers day my Love.”

The playmaker will be hoping to feature when Liverpool take on Manchester United in the Europa League on Thursday night.

Photo: Erik Lamela all smiles with a pal ahead of Dortmund v Tottenham