Photo: Alberto Moreno all smiles with Liverpool duo ahead of Man United clash 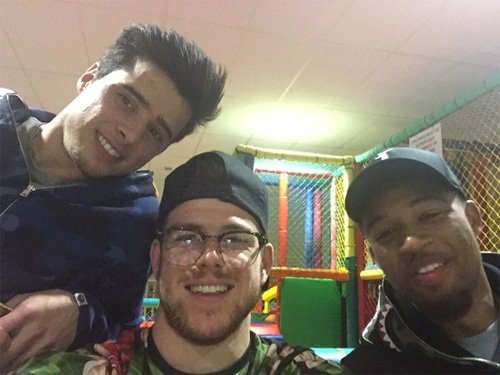 Alberto Moreno was all smiles as the Liverpool defender relaxed with Joao Teixeira and Jordon Ibe ahead of Thursday’s trip to Manchester United.

The Spain international produced a composed performance alongside his fellow Liverpool defender as Jurgen Klopp’s side secured a 2-0 first-leg lead at Anfield last week.

Daniel Sturridge and Roberto Firmino scored either side of half-time in the last-16 clash against their bitter rivals to put Klopp’s men in pole position to reach the next round.

Moreno, who previously won the Europa League with Sevilla in 2014, made the most of his Monday night as he hung out with Portuguese midfielder Teixeira and England Under-21 starlet Ibe.

Liverpool face United in the second leg of their Europa League last-16 clash on Thursday night before the Reds make the trip to in-form Southampton in the Premier League next weekend at St Mary’s Stadium.