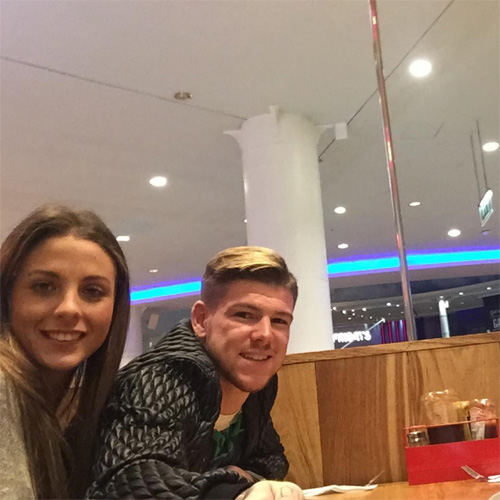 Alberto Moreno wasn’t able to celebrate his first trophy as a Liverpool player last weekend, but the defender was toasting another feat on Thursday night.

The Spain international was criticised for an erratic performance in Liverpool’s 1-1 draw with Manchester City in the League Cup final, which the Citizens won on penalties.

Moreno was dropped to the bench on Wednesday night as Jon Flanagan replaced the former Sevilla defender for Wednesday night’s 3-0 victory over City in the Premier League at Anfield.

However, the 23-year-old joined his girlfriend to celebrate their five-year anniversary to take his mind off a tough week in football terms.

Moreno’s girlfriend Lilia Granadilla wrote on her Instagram page: “March 3rd most special day, 5 years ago I met the person accompanying me day after day and it will be forever. So what better gift and sign of this love that we expect with so many years!

The Liverpool defender will be hoping to reclaim his starting spot for Sunday’s trip to Crystal Palace.

The Reds are in eighth place in the Premier League table and six points behind fourth placed City, who occupy the final Champions League spot.

Ray Parlour: Why I fear for Arsenal ahead of Tottenham derby