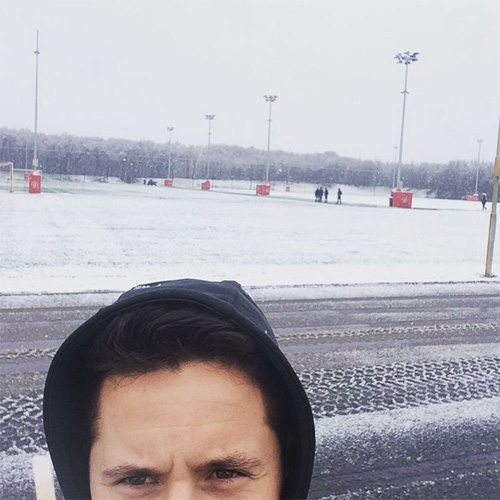 Ander Herrera wrapped up warm for a snowy selfie on Friday morning ahead of a training session with his Manchester United team-mates.

The Red Devils will be aiming to notch up a fifth successive win when Louis van Gaal’s side make the trip to West Bromwich Albion on Sunday afternoon.

The 20-time English champions have beaten Shrewsbury Town, FC Midtjylland, Arsenal and Watford in their last four outings in all competitions.

Herrera managed to get on the score sheet in United’s impressive 3-2 victory over bitter rivals Arsenal on Sunday.

However, the former Athletic Bilbao midfielder didn’t look to enthused about the cold conditions at Carrington when he turned up for work on Friday morning.

Herrera posted on his Instagram page: “Good morning to everyone , I don’t know if the snow will let us train”

United are in action against West Brom in Sunday’s late kick-off.

Herrera moved to the Red Devils in a reported £29m deal from La Liga side Athletic Bilbao in 2014.