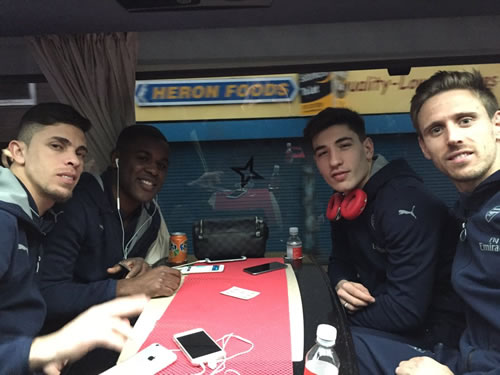 Hector Bellerin looked in good spirits as he celebrated his 21st birthday by helping Arsenal beat Everton 2-0 at Goodison Park on Saturday afternoon.

The Spanish full-back, who has become a regular in the Arsenal first team this season, was joined by Nacho Monreal, Gabriel Paulista and Joel Campbell on the coach back down to London from Merseyside.

Monreal posted the picture above on his personal Twitter account after Saturday’s victory and wrote: “Good performance of all players in a difficult pitch. And happy birthday to my little brother @HectorBellerin”

Arsenal took the lead in the seventh minute at Goodison Park when Danny Welbeck finished off a superb attack by rounding the goalkeeper and tapping home.

And 19-year-old Alex Iwobi made it 2-0 with a calm finish after being put through on goal three minutes before half time.

The result left Arsenal third in the table and eight points behind leaders Leicester heading into the final eight games of the season.

The Gunners host Watford in their next Premier League game on 2 April.