Photo: Benteke, Origi all smiles for Liverpool selfie after 2-1 win at Palace 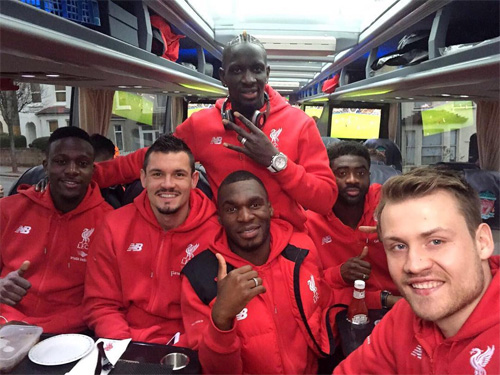 Christian Benteke was all smiles with the Liverpool squad as Dejan Lovren snapped a selfie on the team coach after Sunday’s 2-1 win at Crystal Palace.

Joe Ledley gave Palace a second-half lead against the run of play after Liverpool had dominated the opening 45 minutes.

James Milner received a red card shortly after Palace’s goal to leave Liverpool a difficult task to get back into the game.

But Roberto Firmino capitalised on Alex McCarthy’s mistake to level before substitute Christian Benteke converted an added-time penalty to seal a 2-1 victory.

And Liverpool’s man-of-the-match Lovren posted a selfie with Benteke and some other members of Jurgen Klopp’s squad on the team coach outside Selhurst Park.

Lovren wrote: “What a win today…so happy 😀 great effort from everyone, fighting until the end pays off 💪🏻 well done to @christianbenteke keep going bro. And Kolo smile next time 😜😜😂”

The Reds are in seventh place after their dramatic 2-1 win against the Eagles at Selhurst Park in Sunday’s early kick-off.

Watch: Eden Hazard shows he’s still got it for Chelsea at Cobham