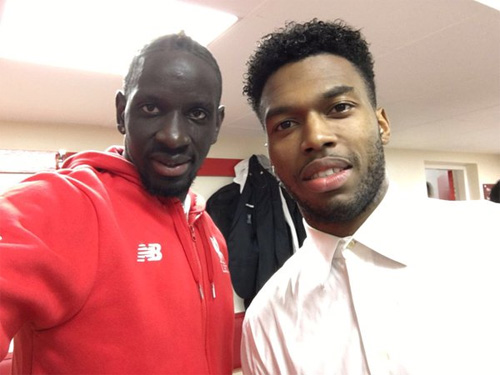 The hosts made the breakthrough in the first half when Daniel Sturridge beat David De Gea from the penalty spot after Nathaniel Clyne was brought down by Memphis Depay.

However, Roberto Firmino handed the Reds a commanding 2-0 first-leg lead at Anfield after a close-range finish with 17 minutes remaining of the first leg.

And France international Sakho, who partnered Dejan Lovren at centre-half for the visit of the Red Devils, posted a dressing room selfie with Sturridge after their emphatic performance.

Thank you for your support tonight 👍🏿 #YNWA #Liverpool #LFC pic.twitter.com/4MlZiGXo5j

Liverpool’s 2-0 win was their first victory over their bitter rivals United in four attempts.

Van Gaal’s host West Ham United in the FA Cup quarter-final at Old Trafford on Sunday afternoon before Liverpool travel to Manchester for the return leg.