Photo: Erik Lamela all smiles with a pal ahead of Dortmund v Tottenham 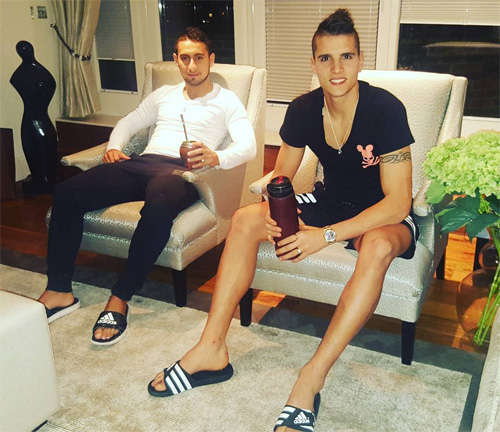 The Argentina international was unable to inspire Tottenham to victory on Saturday afternoon after a 2-2 draw with Arsenal at White Hart Lane.

Harry Kane and Toby Alderweireld put Tottenham into a 2-1 lead after cancelling out Aaron Ramsey’s opener but Alexis Sanchez netted a late equaliser for the Gunners.

Lamela tuned in for Sunday’s Superclasico between his former club River Plate and Boca Juniors but the Argentinian derby finished goalless.

However, the £30.75m signing looked to enjoy the Superclasico despite the lack of goals as he relaxed with a friend on Sunday night.

Lamela wrote on his Instagram page: “Taking @emiliano_panizza some mates with my friend , all ready for #superclasico! #vamosriver”

Tottenham are in second place and five points behind leaders Leicester City.

Lamela has scored three goals and made five assists in 26 Premier League appearances so far this season.

The Argentina playmaker moved to Tottenham from Roma to become the north London club’s most-expensive signing in 2013.

Photo: Philippe Coutinho all smiles with his wife and baby after Liverpool win

Jamie Carragher: Why Liverpool star should get new contract