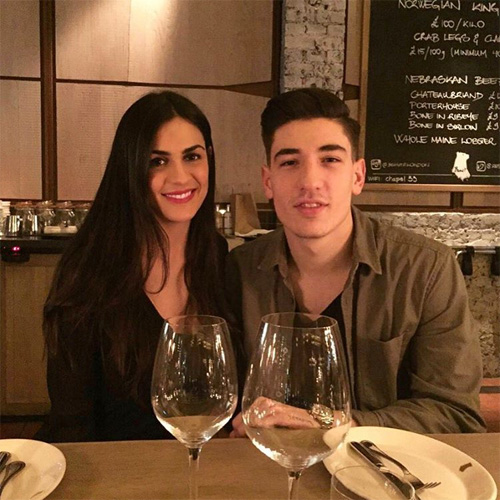 Hector Bellerin all smiles with his girlfriend over dinner Photo: Berta Requeno/Instagram

Hector Bellerin joined his beautiful girlfriend for a romantic birthday dinner on Friday ahead of Arsenal’s trip to Goodison Park this weekend.

Arsene Wenger’s side are in action against Everton just a couple of days after their 3-1 loss to Barcelona in the second leg of their Champions League last-16 clash at Camp Nou.

Arsenal have failed to win their last three Premier League games following defeats by Manchester United and Swansea plus a 2-2 draw with Tottenham.

However, Bellerin looked pretty relaxed as he posed for a photo with his girlfriend Berta Raqueno before presumably joining his Arsenal team-mates to make the long trip to Merseyside.

Bellerin wrote on his Instagram page: “Happy Birthday my love! Thank you for being the best you could have. I love @hectorbellerin”

Arsenal are in third place in the Premier League table and 11 points behind leaders Leicester City.

Wenger’s side have played one game less than their title rivals after Leicester beat Newcastle United in the Premier League last Monday.