Jan Vertonghen met a Tottenham fan with a somewhat interesting tattoo on Thursday... 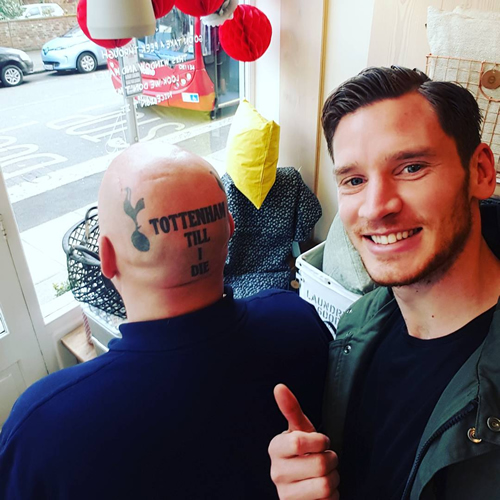 Jan Vertonghen could not help but snap a picture with one of Tottenham’s most recognisable fans on Thursday.

The Spurs defender spotted a supporter sporting a Tottenham-themed tattoo on the back of his head.

And Vertonghen admitted that he could not let the opportunity to take a photo with the loyal supporter pass him by.

The Belgian defender is currently sidelined as he continues his recovery from a knee injury suffered during the win over Crystal Palace back in January.

Spurs head into Saturday’s north London derby clash with Arsenal looking to return to winning ways after the disappointment of their 1-0 loss at the hands of West Ham United at Upton Park on Wednesday night.

Victory over Arsene Wenger’s men would lift them six points clear of their bitter local rivals with nine games left to play.

Martin Keown: This Arsenal star will be massive miss against Tottenham