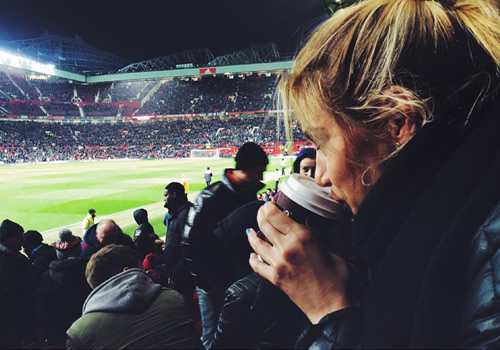 Evelina Kamph shared this picture with her friend on Wednesday night Photo: evelinakamph/Instagram

Evelina Kamph was in the Old Trafford stands with a friend as her partner Juan Mata fired Manchester United to a 1-0 victory over Watford on Wednesday night.

The Spanish playmaker netted a late free-kick to earn Louis van Gaal’s men their second straight victory in the Premier League and move them level on points with fourth-placed Manchester City heading into the final 10 games of the season.

United have shown some significant improvements in recent weeks and the win over the Hornets came on the back of their thrilling 3-2 win over Arsenal at Old Trafford last weekend.

And Mata’s girlfriend Kamph seemed to be enjoying herself as she snapped a picture of her friend and wrote on Instagram: “Two halves. Two hot chocolates. @carolinedackas #logic”

United now turn their attentions back to Premier League affairs and preparing for their trip to West Bromwich Albion on Sunday afternoon.

Van Gaal will be eager to see his team stretch their Premier League winning run to three games to keep their top-four bid on track.

Paul Ince: What Arsene Wenger should have done to improve Arsenal