Photo: Martin Skrtel all smiles with Liverpool defender ahead of Man United clash 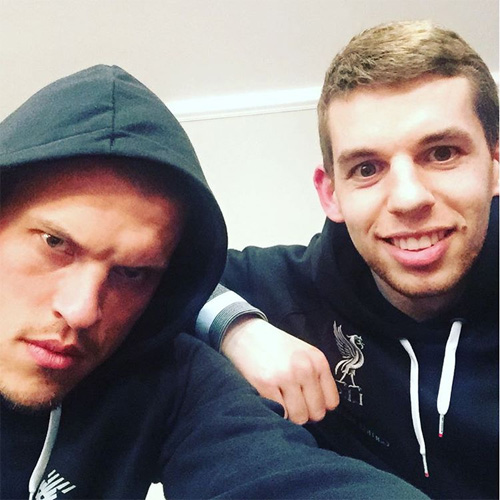 Martin Skrtel and Jon Flanagan were all smiles on Tuesday night ahead of Liverpool’s Europa League clash against Manchester United this week.

The Slovakia international made his return to action for Liverpool’s Under-21 side against United on Friday after a three-month spell on the sidelines due to a hamstring problem.

Flanagan has recently overcome an injury nightmare of his own after the England full-back spent over 18 months out due to a troublesome knee injury.

The 23-year-old dropped to the bench for Liverpool’s 2-0 victory over United in the first leg of their Europa League last-16 clash last week.

However, the Liverpool pair looked in high spirits after an apparently long journey ahead of Thursday night’s second leg at Old Trafford.

Skrtel wrote: “Me and my boy @jonflan38 after nice 6 hours on the coach…😴😡 but flanno is smiling as always…”

United are unbeaten in ten European home games (W8 D2), and have recovered from a 2-0 away defeat to win a European tie more than once, perhaps most notably beating Barcelona 3-0 at Old Trafford in the 1983/84 European Cup Winners’ Cup quarter-finals after a 2-0 first-leg loss.

Liverpool kept a fourth successive clean sheet in the first leg – one more in the second leg and they will match SSC Napoli’s Europa League record for successive games without conceding.