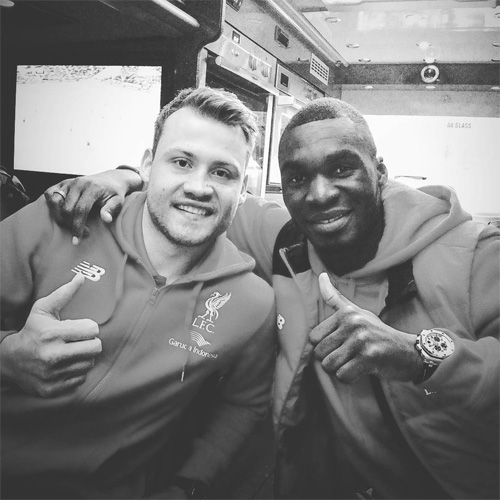 Simon Mignolet was all smiles with Christian Benteke after Liverpool were 2-1 winners against Crystal Palace on Sunday.

Joe Ledley gave Palace a second-half lead against the run of play after Liverpool had dominated the opening 45 minutes.

James Milner received a red card shortly after Palace’s goal to leave Liverpool a difficult task to get back into the game.

But Roberto Firmino capitalised on Alex McCarthy’s mistake to level before substitute Christian Benteke converted an added-time penalty to seal a 2-1 victory.

Jurgen Klopp’s side are six points behind fourth-placed Manchester City following their win at Selhurst Park.

Liverpool goalkeeper Mignolet posed for a selfie with his compatriot and match-winner Benteke after Sunday’s 2-1 win at Selhurst Park.

Mignolet wrote: “Thanks everyone for all the birthday messages but this guy gave me the only birthday present I wanted today! #3points #YNWA”

Liverpool are in seventh place in the Premier League table and six points behind fourth-placed Manchester City.

The Reds aren’t in Premier League action against until their trip to Southampton on 20 March.

Ian Wright: What I like about this Tottenham striker