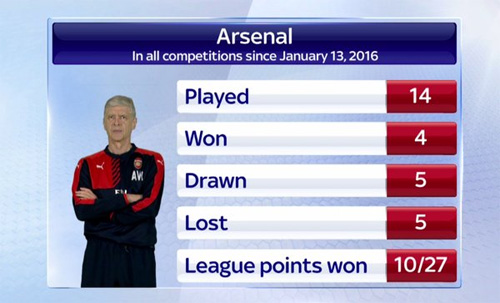 Arsenal have only won four games in 2016 Photo: Sky Sports

The Gunners suffered a surprise 2-1 loss to Watford in their quarter-final clash at the Emirates Stadium.

Arsenal will switch their focus to the Champions League on Wednesday night before Wenger’s side make the trip to Everton at Goodison Park in Saturday’s early kick-off.

The above Sky Sports image highlights Arsenal’s disappointing form in 2016.

The Gunners have lost to Chelsea, Manchester United and Swansea City in the Premier League, whilst the north Londoners have also drawn four top-flight games.

It means the 2004 Premier League winners have only collected 10 points from a possible 27 in their last nine games, while the Gunners have won just four of their 14 games in all competitions this year.

The Gunners are in action against La Liga holders Barcelona in the second leg of their Champions League last-16 clash at Camp Nou on Wednesday night.