Oulala's stats show just how good Barcelona trio Lionel Messi, Neymar and Luis Suarez have been so far this season 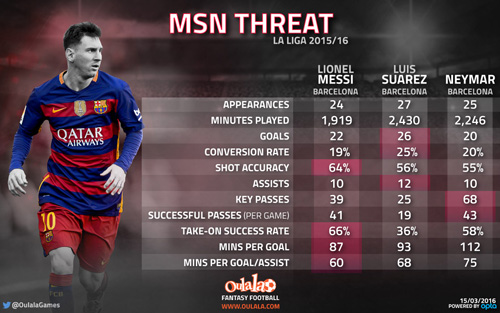 Arsenal already have a tough job on their hands at Camp Nou on Wednesday night, but the form of Barcelona’s front three makes their task near impossible.

The Gunners trail the Champions League holders 2-0 from the first leg last month after Lionel Messi scored twice in the final 18 minutes at the Emirates Stadium.

The Argentina international hasn’t taken his foot off the pedal since his London exploits, excelling alongside Neymar and Luis Suarez.

The above Oulala infographic highlights the goal-scoring ability of Barcelona’s MSN against an out-of-form Arsenal side.

Suarez has scored 26 goals and has made 12 assists in 27 La Liga games, while Messi has netted 22 times and Neymar has scored 20 goals.

Messi has the superior shot accuracy of 64 per cent, plus a take-on success rate of 66 per cent.

The Brazil forward, meanwhile, made 68 key passes and 43 successful passes per game.

Arsene Wenger’s side will need to be at their defensive best to prevent the Barcelona trio putting up a rugby score-line.