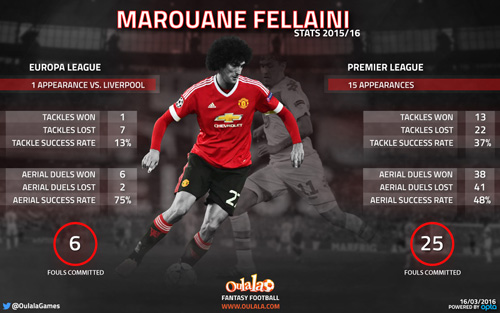 Marouane Fellaini has been undisciplined this seasonm Photo: Oulala

Marouane Fellaini has become something of a pantomime villain with Manchester United supporters since his move to Old Trafford in 2013.

The Belgium international was the first signing of David Moyes’s doomed reign and Fellaini has failed to justify his £27m transfer fee from Everton.

Louis van Gaal started with the 28-year-old midfielder in last Thursday’s 2-0 loss to Liverpool at Anfield but these Oulala stats show the United manager would be wise to leave Fellaini on the bench for the return leg.

Fellaini won just one of his attempted eight tackles which results in a tackle success rate of 13 per cent. In the Premier League, the former Toffees star has won lost 22 of his 35 attempts challenges, which amounts to 37 per cent tackle success rate.

Standing at 6ft 4ins, it isn’t a shock to learn that Fellaini won six of his eight aerial duels against the Reds. But surprisingly, his record in the Premier League is poor, winning just 48 per cent of his aerial duels.

Fellaini’s indiscipline has often resulted in criticism from supporters, pundits and ex-players. The Belgian conceded six fouls in the first leg of their Europa League last-16 clash.

In the Premier League, he has been penalised for 25 indiscretions.

Perhaps it is time for Van Gaal to listen to the United fans and resist the temptation to use Fellaini given his poor defensive stats.