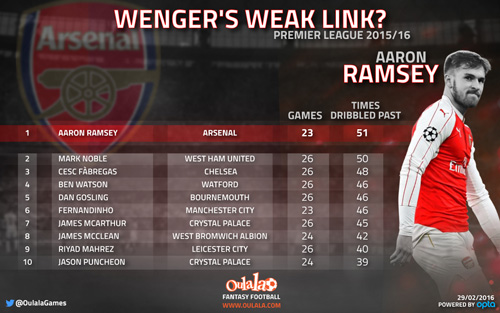 Arsenal midfielder Aaron Ramsey has been struggling with his defensive duties Photo: Oulala

Aaron Ramsey was heavily criticised for his performance in Arsenal’s 3-2 loss to Manchester United on Sunday.

Many Gunners supporters took to social media to vent their frustrations over Ramsey’s inept display at the heart of Arsene Wenger’s midfield.

Former Arsenal defender Martin Keown had his say on the 24-year-old’s performance in his Daily Mail column after he criticised the midfielder for failing to fulfil his defensive duties at Old Trafford.

The above Oulala infographic reveals that Ramsey’s detractors have a case against the Wales international.

Perhaps unsurprisingly given his performance against United, Ramsey has been dribbled past by an opponent more times than any other player in the Premier League this season.

In fact, Ramsey has been dribbled past a staggering 51 times in 23 top-flight games in the 2015/16 game, which is more than West Ham skipper Mark Noble and Chelsea midfielder Cesc Fabregas.

With Santi Cazorla and Jack Wilshere working on their respective recoveries from injury problems, it is an issue Arsene Wenger will need to address ahead of Saturday’s clash against derby rivals Tottenham, who have one of the best midfields in the top flight.

Thiem time in Acapulco, as Austrian soars to No14 – but he’s ready for more