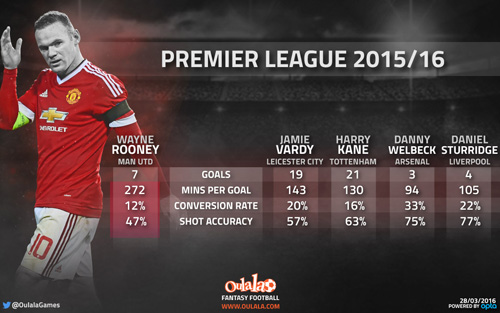 Wayne Rooney has struggled to match his England rivals this season Photo: Oulala

Wayne Rooney is already coming under pressure ahead of Euro 2016 given the Premier League form of Harry Kane and Jamie Vardy.

The Manchester United captain is currently sidelined with a knee injury and watched on as Kane and Vardy inspired England to a 3-2 victory over Germany at the weekend.

Daniel Sturridge and Danny Welbeck are also vying for a first-team place and the England duo have been in impressive form for their respective sides, Liverpool and Arsenal.

The above Oulala infographic highlights that Rooney is trailing Vardy, Kane, Welbeck and Sturridge in the stats department.

Kane has scored 21 times in the Premier League, whilst Vardy has netted a 19 goals in a special campaign for Leicester and their striker. Rooney, on the other hand, has netted just seven Premier League goals.

While the England skipper has scored more Premier League goals than Sturridge and Welbeck, the Liverpool man and Arsenal forward have a better minutes per goal ration which highlights their injury-hit seasons.

All four of his main rivals have a better conversion rate than Rooney’s 12 per cent: Welbeck leads with 33 per cent and Daniel Sturridge is in second with 22 per cent.

Again, the Liverpool and Arsenal strikers lead the way in terms of shot accuracy, but Kane stands at a respectable 63% and Vardy is 10% clear of Rooney’s 47 per cent shot accuracy.