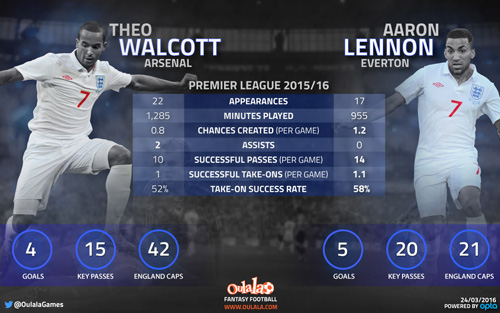 Aaron Lennon and Theo Walcott could do battle for one of the final spots in Roy Hodgson’s England squad for Euro 2016.

The Three Lions boss will be fine-tuning his travelling part over the next week when England take on Germany and the Netherlands in international friendlies.

These Oulala stats show Everton winger Lennon should be leading Walcott in the race to secure a spot in Hodgson’s European championship squad.

While Walcott has played more minutes and made more appearances than Lennon in the Premier League this season, the Everton midfielder has created 1.2 chances per game, which is more than Walcott’s 0.8.

The Arsenal striker has made two assists and Lennon has failed to set up any of his team-mates for a goal but the Toffees star has made 20 key passes – five more than Walcott.

Lennon has also scored more Premier League goals than Walcott this season (5-4) and has a better take-on success rate of 58 per cent.

While Walcott has 42 England caps to his name, perhaps Hodgson should consider the more inexperienced Lennon at the Arsenal striker’s expense.