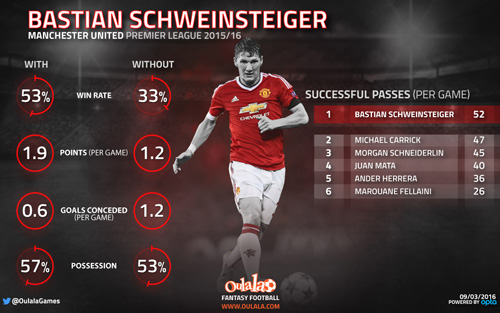 Bastian Schweinsteiger has been missed by Manchester United Photo: Oulala

Bastian Schweinsteiger could return to the Manchester United side for their Europa League clash at Liverpool on Thursday night.

The Germany international has been sidelined since 9 January when United limped to a 1-0 victory over Sheffield United in the FA Cup third round at Old Trafford.

The World Cup winner has made a mixed start to life at Old Trafford and the 31-year-old hasn’t been immune to criticism following United’s patchy form under Van Gaal.

However, Oulala’s stats show that Schweinsteiger has been missed over the past two months following his knee injury.

Remarkably, United have won 53 per cent of their games with Schweinsteiger in their side, while the Red Devils have managed a disappointing win rate of 33 per cent without the Bayern Munich legend.

So it comes as no surprise that Van Gaal’s side average 1.9 points per game when Schweinsteiger is leading the United troops.

The 20-time English chmapions have a better defensive record with Schweinsteiger shielding the back four, conceding 0.6 goals per game with the German marshalling the rear-guard action.

United have shipped 1.2 goals per game when the Champions League winner has been missing.

Some have criticised Schweinsteiger for his predictable passing in the United side, but the Red Devils have 57 per cent possession when he is pulling the strings in midfielder, as opposed to 53 per cent without the German.

The £6.7m signing won’t be fit for the first leg of United’s Europa League last-16 tie on Thursday night, but Van Gaal will be hoping his midfield general can return for the second leg at Old Trafford on 17 March.