Mark Noble has been performing his England rivals at Man United, Liverpool and Tottenham Hotspur so far this season 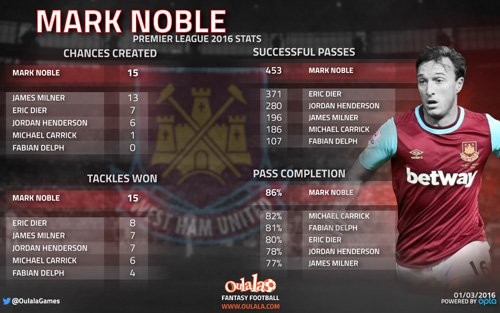 Mark Noble has been accumulating growing support over a call-up to Roy Hodgson’s England squad ahead of this summer’s European championship.

The West Ham United midfielder has previously been targeted by Republic of Ireland manager Martin O’Neill but Noble has underlined his desire to play for England despite edging towards his thirties.

Noble has been a key of the Hammers’s excellent form under Slaven Bilic so far this season as the east London side continue to push for a top-four finish ahead of their move to the Olympic Stadium next summer.

And these Oulala stats show that England boss Hodgson should perhaps consider Noble for a midfield role given his dominance over his compatriots.

Noble has created 15 chances for team-mates this season, which is two more than his nearest rival, Liverpool vice-captain James Milner and a nine more than another Reds midfielder, Jordan Henderson.

His passing has been excellent, too. The 29-year-old has racked up 453 successful passes, which is almost 80 more than the next best English, Eric Dier. United’s so-called pass master Michael Carrick has made just 186 successful passes – 267 less than the Hammer!

The Hammers man has also carried out his defensive duties in a professional manner. Noble has won 15 tackles, which is seven more than Tottenham’s Dier.

Surely given his all-round versatility, Noble has earned the chance to shine in the England team.