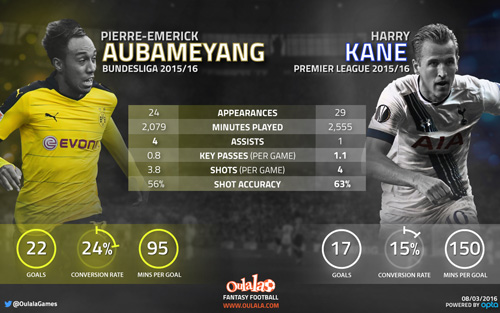 How do Pierre-Emerick Aubameyang and Harry Kane compare? Photo: Oulala

The England international scored a brilliant goal in Saturday’s north London derby ahead of Tottenham’s trip to Dortmund for the first leg of their Europa League last-16 clash on Thursday night.

However, Oulala’s stats show Aubameyang has been outperforming the brilliant Kane in the 2015/16 season, prompting reported interest from Arsenal, Liverpool and Manchester United ahead of the summer transfer window.

Aubameyang has made five appearances less than Kane and the Spurs striker has racked up nearly 500 minutes more than the Gabon international this term.

But the Dortmund striker has scored 22 times in comparison to Kane’s 17 Premier League goals, whilst he has made four assists for team-mates, which is three more than Kane.

However, the Tottenham striker has made marginally more key passes than Aubameyang, while Kane boasts a superior shot accuracy of 63 per cent – his rival can only manage 56 per cent.

But given Aubameyang has scored a goal every 95 minutes this season, which is significantly better than Kane, who has a conversion rate of just 15 per cent, the Dortmund striker will be favourite to break the deadlock in the first leg on Thursday night.